Ariel view rendering of Newark's new Terminal A coming in 2023

Newark Airport hopes to open its new and improved terminal A by December 8th. This project has been in the works since 2018 and is finally reaching a conclusion as construction wraps up. The remodeling of terminal A will cost a total sum of $2.7 billion. This value holds the record for the largest single investment in New Jersey by the Port Authority.

This renovation is one of several other projects across the U.S., as various substantial airports are also undergoing construction. New terminals in Denver, Los Angeles, New York LaGuardia, Orlando, and several more have been opening up in recent months. The renovated terminal in Newark is meant to replace its cramped, disorganized older model. It is no secret that Newark airport is a pain for travelers flying in and out of the New York, New Jersey area. Due to constant congestion and issues with the scheduling systems, passengers are usually less than eager to utilize Newark Airport as their mode of transportation. Luckily, since the remodeling of Terminal B and the current one for Terminal A, it appears as though Newark Airport is getting the makeover it so desperately needed.

Governor Phil Murphy promises a brightly lit, organized, and art-filled terminal that is set to please travelers. The goal was to modernize the terminal while also embedding notes of Jersey culture to please locals. The renovation guarantees 8 new bridges for easier drop-off and pick-up accessibility, 140 acres of airfield paving, an expansion of the public parking facility, and 33 brand-new gates. However, only the first 21 of the complete 33 gates will open by the 8th with the rest following in the first few months of 2023. On the less extreme end of construction, there will be displays of local artwork with 60 renewed and original dining and retail options

Even the boarding and security processes have been updated. The new baggage scanners look like something out of a Sci-Fi flick, with modern touch screens and state-of-the-art scanners. The new and improved terminal A will be able to hold more than 13 million passengers annually compared to their usual rate of 9 million. Although in the past, the airport has held more than 9 million, they will now be better equipped to hold this number comfortably.

It is going to be an exciting development to see how the public reacts to these renovations. The question is whether they are actually practical or just a flashy excuse for modernizing the airport. Either way, these changes appear promising and it will be interesting to see the final result. 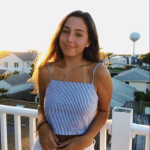 Hi!
My name is Danielle Lane and I am a student at Penn State University starting my junior year. WE ARE!! I'm majoring in Political Science and Communications. I've lived in New Jersey my whole life, specifically in Bergen County, and I intend to return once I complete my education.. I enjoy painting, baking, and spending time with my aussie puppy, Wolf!

Ride This NJ Holiday Train Through Millions of Christmas Lights