How the Wooden Walls Project Embraces the Spirit of Asbury Park

Asbury Park, New Jersey, is well-known for its tumultuous history. Most notably, for the race riots of 1970 that destroyed the aging buildings lining Springwood Avenue and left 180 people injured. But, Asbury Park is also known for its undying spirit. The city of Asbury Park continues to revive itself, culturally and economically, turning its dust and decay into enduring art. It began in 2002 and continues to this day. And, aside from the mythical lyrics sprinkled throughout Bruce Springsteen’s early albums, a walk down Asbury Park’s boardwalk serves as evidence of this. The Wooden Walls Project, curated (and created) by one of Asbury Park’s muses, Jenn Hampton, has been an inexhaustible source of inspiration in yet another turbulent time.

Among the boarded buildings that once served as spaces for the music that saved Asbury Park, vibrant murals adorn bare walls. The artists come from all over the world, each with a story told through their work. Much like Asbury Park itself, the Wooden Walls Project was born from a synergy of events, from both endings and beginnings. 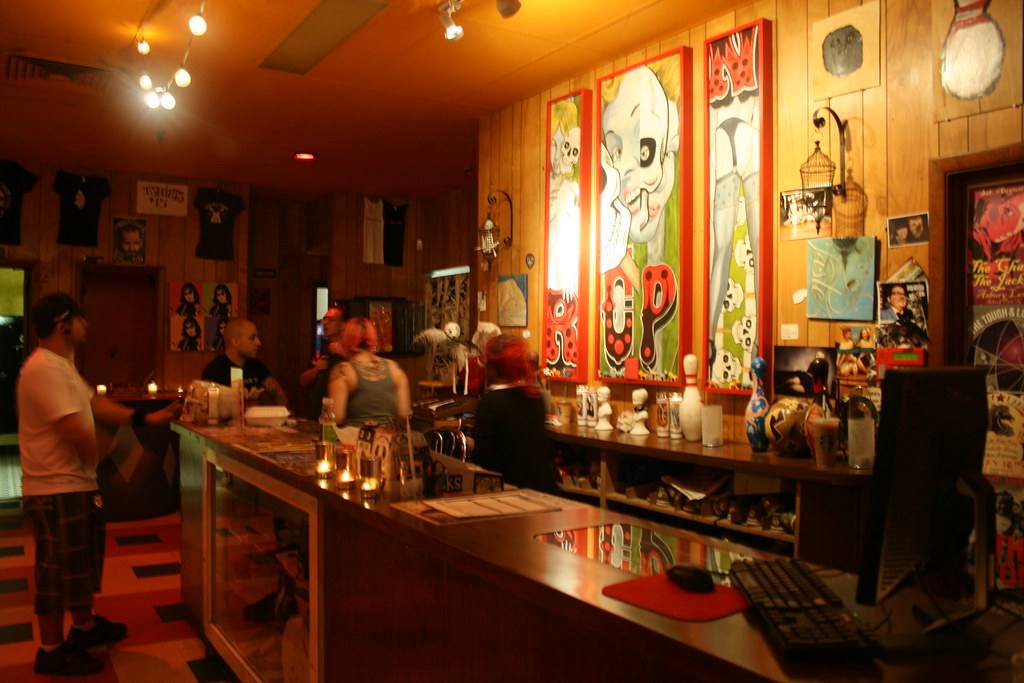 To get to the origin of the Wooden Walls Project, we have to go backward to 2004, when Hampton first moved to Asbury Park. She and her friends were building up the old Asbury Lanes into its own work of art—a DIY venue/bowling alley where anyone with $10 in their pocket could go to experience something new. In Hampton’s own words, “We wanted to have a place that was a little uncomfortable but in a good way. Not in the ‘you don’t have enough money’ way, but in the ‘I don’t understand what I’m looking at’ kind of way. You know how you have to stand outside your comfort zone to learn something?”

In these beginning stages of Asbury Lanes, Hampton realized the need for art in Asbury Park. As she decorated the walls of Asbury Lanes and revamped the venue with installations, she noticed most people’s reactions were inquisitive. No one had seen art like this before. “Do these people not go to New York City to see art?” she thought. Hampton became obsessed with the notion of bringing art to the people in town—especially if no one was going to leave town to get it.

The Influence of Shepard Fairey

In 2011, All Tomorrow’s Parties hosted a music festival scattered around Asbury Park: Convention Hall, Paramount Theatre, Berkeley, and Asbury Lanes. It was a three-day event that hosted comedic acts, literary readings, and of course, good music. Asbury had never seen anything like this. Renowned artist and founder of Obey Clothing, Shepard Fairey, was the festival’s artistic component. Fairey had planned to do one mural on the backside of the Sunset Pavilion. However, inspired by the ancient architecture of Asbury Park, he continued to spread punk icons and album covers across town.

By the end of the festival, there were murals across Asbury. A portrait of Joe Strummer, a mural across the side of Asbury Lanes titled Mt. Rushmore of Punk, and several album covers on the front of the Sunset Pavilion. Although only one of Fairey’s murals remains, these first murals catalyzed Asbury’s art scene. In 2015, two local artists, Porkchop and Bradley Hoffer, had a similar idea. After Hurricane Sandy in 2012, the town has placed wooden walls across its buildings for reinforcement. Porkchop and Hoffer wanted to paint them. Porkchop used the architectural remains at the southern end of the boardwalk and its corridor to paint a flapper-esque mermaid. Hoffer used the other side for his piece, which Hampton describes as “really cool birds.”

“What had happened was [that] people congregated around public art. I don’t think the developers knew what that meant and were just excited to see it happen.” Inspired by the community’s response, Hampton began asking for assistance to curate a program involving murals in public spaces.

Unfortunately, in 2015, Asbury Lanes fell into high-end developers’ hands and later re-opened for a new kind of crowd. Although it was a difficult period in Hampton’s life, her passion was still to bring art to Asbury. Three months later, she was given another chance. Madison Marquette, the developer of the boardwalk, had approved her budget for what we know today as the Wooden Walls Project.

It started with eight murals by local artists that Hampton knew had a love for Asbury Park. The concept was the same as it was for the original Asbury Lanes—to give people an art experience they would have otherwise never had.

The Artists Of the Wooden Walls Project One of the first artists to contribute was Ann Lewis, an activist originally from Minneapolis. “She did one of our biggest murals to date. It’s a maze piece [on the Steamplant building]. It’s called ‘Never Turn Your Back On The Ocean.’ You can only see the text in the piece if you stand far away from it—if your back is to the ocean.” It was Lewis’ stance on plastics in the sea. But it was also a tribute to her aunt, who has passed on a year before.

“Lewis had grown up in a landlocked community. So every summer, she would visit her aunt and go to the ocean. [And] every summer, her aunt would warn them not to turn their back on it, or they’d be stunned by a wave or something. But as she was painting, she realized the irony. That her back was turned on the ocean and [what they meant on a larger scale].” Rubin 415 with his artwork Photo by Wooden Walls Project

All of the Wooden Walls murals have a story, and when Hampton walks the boardwalk, she can recount each in detail. Rubin 415 moved to New York to succeed as a street artist. “But, it took him moving to New York to realize he needed his own style,” she said. “The buildings and the shapes sort of became his homage to his Swedish home.” His mural, 1800 Degrees Fahrenheit, is located on the Sunset Pavilion. The title of the piece comes from Bon Jovi’s first album. “Most people talk about Bruce, but he was the first person to bring up Bon Jovi. I thought that was really cool. That was his homage to what his New Jersey experience was,” Hampton said. Then there’s DeeDee, the anonymous street artist from Brooklyn, who contributes to Wooden Walls while the rest of the world is asleep. Hampton leaves room for this kind of organic serendipity, opportunities for happenstance and collaboration.

Keeping The Spirit Of Asbury Alive Inside the carousel
Photo by Jessica McLaughlin

Asbury Park and the Wooden Walls Project have attracted artists from Brazil, London, Japan, and Argentina. It’s become a space for an artistic community to grow and a place for people to feel things. Asbury Park is a work in progress, but a beautiful one—there’s room to appreciate half-finished buildings and boarded walls because there’s art wherever your eyes land. “It’s like this symbiotic, cooperative thing that happens in your brain. It helps the visitor understand that art takes on many shapes and forms.”

“It’s a three-fold thing, right? Art gives back. I reach out to an artist, maybe fly them into town. They stay here for three days, engage in the local community, and learn about the history. They take away this experience that inspires them to tell someone else about it. ‘Oh, I went to this weird place in Asbury Park; it has this vibe, and you should totally visit.’ The artist goes away paid; they continue to do their work. It contributes to their lifestyle, and what happens is they leave a gift for us, and it continues to give and give and give.”

Hampton hopes the Wooden Walls Project continues to keep the spirit of Asbury Park alive. “I feel like the Lorax. If we lose this special thing we have, it’s going to be hard to get back. You can always build complexes and condos. You can always find people to live here, but you can’t find musicians and you can’t find artists.”

For Hampton, each mural painted on these wooden boards and concrete walls is an act of resistance towards the ordinary. A crumb left for the next person who needs to be inspired. The Story of The Stone Pony and...