Hudson County’s food scene is booming. It seems as though every day brings with it some delicious new restaurant or bar concept right in our backyard. This year, we’ve put together a comprehensive list detailing the latest eateries to open in our area.

Franklin Social
Replacing P.J. Ryan’s on the corner of Barrow and Mercer is Franklin Social. Inspired by founding father Benjamin Franklin, Franklin Social revamps the traditional American tavern. Brought to you by the same minds behind Cowan’s Public in Nutley and The Barrow House in Clifton, Franklin Social is kicking off the new year with a little know-how. With an emphasis on Colonial drinking culture, and a menu that changes with the seasons, it just might be our favorite new hangout of 2020.

Manny’s District Lounge
A new cocktail bar in Mark-Cali’s Harborside recently opened its doors to a lucky few during a preview event showcasing their drinks. Manny’s boasts 11 signature cocktails, and a $75 million renovation. In addition to happy hour specials, the sleek new lounge will also include billiards, ping pong and foosball tables. Many of their cocktails feature local spirits including favorites such as Misunderstood Whiskey and Corgi Spirits.

LOKAL
With a perfect view of the New York City skyline, LOKAL Eatery and Bar brings new life to the space formerly occupied by Taphaus. Using locally-sourced ingredients, LOKAL focuses on smaller plates with globally-inspired flavors coupled with a communal atmosphere. Dig into small plates such as their savory truffle mac and cheese, or, if you’re feeling hungry, large plates like lamb medallions over spiced couscous.

DOMODOMO
Quality and innovation are understated terms to describe DOMODOMO. From the minimalist interior design created by veteran designer, Jae Park, to the culinary genius of founder Brian Kim, this high-end yet simplistic restaurant is constantly evolving and improving. Descending from NYC’s first hand-roll sushi bar, DOMODOMO  offers a variety of dishes like their signature made-to-order hand rolls as well as hot dishes like spicy smoked pork belly or Korean fried chicken.

New to Jersey City (The Heights)

Busy Bee Organics
Eating out can add up in expenses but sometimes you don’t have the time, nor the energy, to prepare a meal every night. This is where Busy Bee Organics comes in. A meal prep establishment new to Palisade Ave, Busy Bee is offering The Heights a service unlike any other in the area. With on-site nutritionists, locally sourced ingredients and an evolving menu, Busy Bee is sure to satisfy the neighborhood’s fast-paced needs.

Cocoa Bakery
One of the downtown areas favorite sweet spots has made its way to The Heights neighborhood. The second storefront for Cocoa Bakery sits on Central Ave, still owned and operated by former Nobu pastry chef Jessica Isaacs. The flagship store is triple the size of its sister location, but serves up the same selection of delicious pastries, pies, custom cakes and cookies. Not to mention their killer coffee to wash it all down.

Bread & Salt
Attracting the attention of big-name food critic Pete Wells, one could say that Bread & Salt has a running start on success. This pizzeria takes its food very seriously and doesn’t view toppings as a garnish but an intrinsic part of the pizza’s identity. Each slice is crafted to be an experience unlike any other, adding yet another layer to Jersey City’s emerging pizza game.

The Franklin
Twenty years in the making, The Franklin is the pride and joy of Chef Jamie Ramirez. Specializing in homemade Italian food, Ramirez hopes to serve the community in ways that surrounding restaurants don’t. His love for the craft shines through in The Franklin’s eclectic menu ranging from braised short ribs and an array of risottos to eggs benedict and ricotta pancakes. Ramirez plans on serving all-day brunch and dinner at night with the option of catering at any event.

Riverview Wine & Spirits
It is such a rarity to find natural wines outside of vineyards or high-end restaurants. Riverview Wine & Spirits is here to fill that need. With a vintage and classic vibe, Riverview prides itself on the home-grown quality of all its products from natural, organic and biodynamic wine offerings to cheeses, craft beers, ciders and specialty spirits.

Loquito
Breaking new ground, Loquito is the first if not only Lebanese-inspired taqueria. Loquito balances itself in a way where it is not fully Mexican or Lebanese cuisine, but a perfect fusion of the two. Each dish’s ingredients are fresh and their flavors are distinct while still being complementary to each other; they operate with a combination-style menu making the flavor possibilities endless.

Olivia’s (Opening March 2020)
Native Hoboken architect group OLMK is converting the former corner store Sasso’s Deli into an American-style eatery set to open in March of 2020.  From Grand Vin owner Mike Galluci, Olivia’s will maximize the deli’s previous dining area and move the kitchen into the basement. The upscale dining concept has Hoboken residents waiting with bated breath in anticipation of a new Garden Street restaurant.

Simply Chai
Chai directly translates to “tea” in Hindi, which is exactly what Simply Chai is dedicated to providing. Hudson County is home to a large population of East Asian peoples and it is very exciting to see a modern and authentic Chai brewery. Made by brewing black tea with the exotic and earthy flavors of masala, cardamom or matcha, be sure to pair your Chai with one of their sweet or savory dosa waffles garnished with everything from Amul cheese and garlic chutney to bananas and chocolate syrup. Simply Chai is set to bring in an entirely new flavor and culture to the people of Hoboken.

VENTANAS at the Modern
Even from the pictures, one can appreciate the artful presentations of the food and drinks at VENTANAS. From bison short ribs to dragon roll sushi, VENTANAS has a very worldly menu as their cuisine is a mix of American, Asian and Cuban flavors. Set beside Fort Lee’s The Modern, VENTANAS is a classy yet comfortable outing for any occasion, and the atmosphere is perfect for everything from a romantic dinner date to a night out with friends.

De Novo European Pub
Sitting on the edge of the Hudson River overlooking New York City and the George Washington Bridge is De Novo European Pub. From the same owner of the restaurant’s sister location in Montclair, De Novo’s Mediterranean-inspired design looks like it’s been taken right off the coast of France. Its European-style cuisine melds traditional Italian and French flavors  offering specials like filet mignon au poivre and the Chilean sea bass. Perfect for a casual lunch or dinner and drinks, De Novo brings a new culture from the old world. 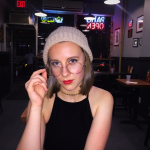