How Salt Water Taffy Was Invented in New Jersey

Summer is just around the corner and you know what that means. Colorful umbrellas painting the coast of the Jersey Shore. Scorching hot afternoons lounging on the beach. Adventures perusing the boardwalk’s arcades and mom-and-pop shops. But, New Jersey summers wouldn’t be complete without the sweet, sticky treat known as salt water taffy.

Salt water taffy has been New Jersey’s staple since its invention in Atlantic City 138 years ago. Taffy isn’t only a fun souvenir from a vacation down the Shore, it’s a favorite year-round snack among many Garden State beachgoers.

Salt water taffy has remained a hot commodity sold at local boardwalk stores and small businesses throughout New Jersey. In Atlantic city alone, James Candy Company reported selling 600,000 pounds of salt water taffy each year in 2013. There are currently over 70 flavors of taffy sold at various stores, so customers can create a personalized, sugary assortment of their favorite tastes. With over a hundred years of history, salt water taffy has become the popular candy we know today. 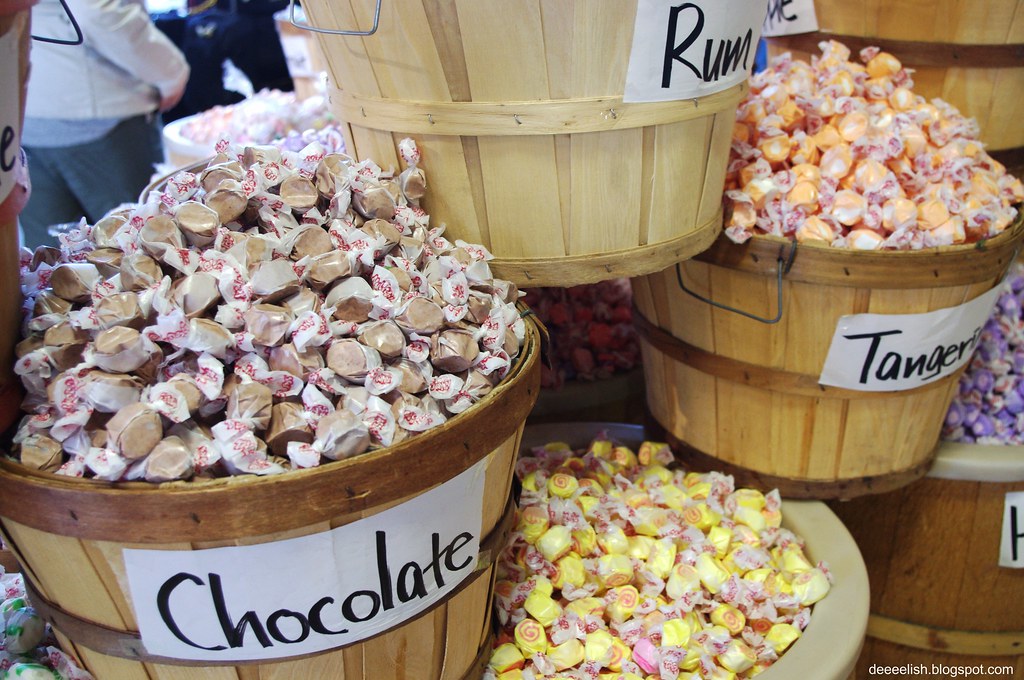 Salt water taffy’s history is a long and sticky one. According to folklore, David Bradley was the owner of a small candy stand on the Atlantic City Boardwalk. His store flooded by white sea foam during a storm in 1883. The salt water from the Atlantic Ocean completely soaked his stock of taffy. It is believed Bradley still opened his stand the day after the storm and a young girl came to ask if he had any taffy. In response, Bradley referred to it as “salt water taffy,” and gave the girl the taffy he had. It was at this moment that the delicious confection we know today was born. 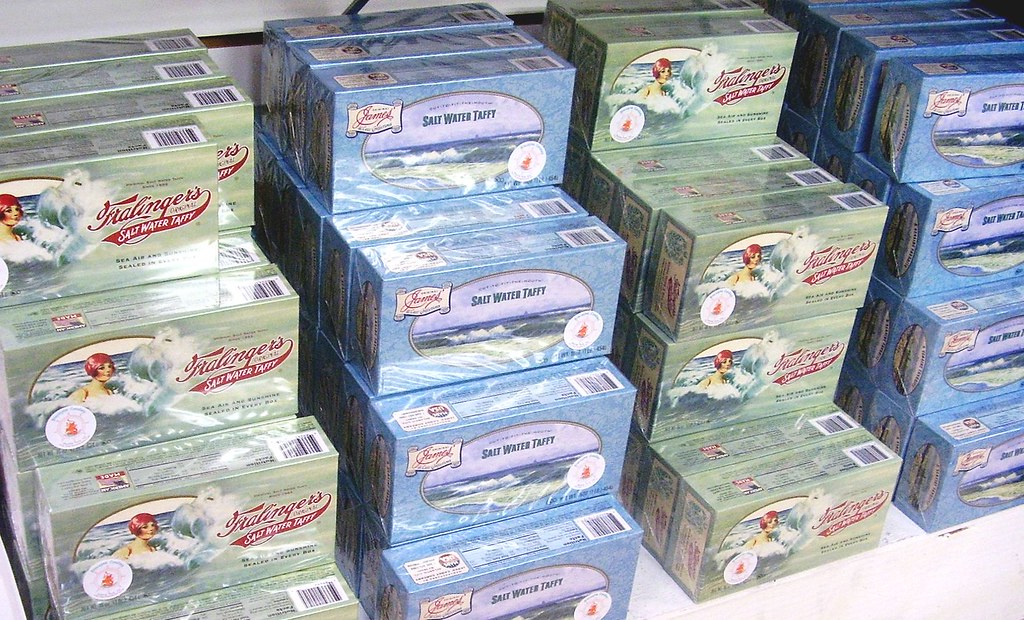 However, after Fralinger popularized salt water taffy in New Jersey, he faced competition from other local shore confectioners. Enoch James, a fellow Atlantic City candy maker, supposedly had been crafting his salt water taffy years before it was introduced to the boardwalk in the late 1880s. James made salt water taffy less sticky and it easier to unwrap by perfecting his recipe. Not only did James revolutionize the recipe, he accelerated the process of making taffy by developing machines that “pull” the candy. This makes taffy smooth, cutting it into bite-size pieces, and wrapping them for packaging. With James’ new equipment, salt water taffy manufactures are able to produce 1000 pieces of taffy per minute.

Pulling It All Together

Most confectioners today still use James’ process and polished recipe. To make salt water taffy, candy makers start by mixing together the basic ingredients: sugar, corn syrup, cornstarch, salt, water, butter, and glycerine. They then cook the mixture in large stainless steel or copper kettles. Once it reaches 275 degrees Fahrenheit, the taffy is moved to a vacuum where it is cooked quickly and all the excess moisture is removed. Confectioners cool the taffy until it is room temperature. Next, they “pull” the taffy in large machines in order to aerate and smooth it. They add flavoring and food coloring at this point in the process. Confectioners blend the color and flavoring together through pulling. Finally, they cut and wrap the taffy. 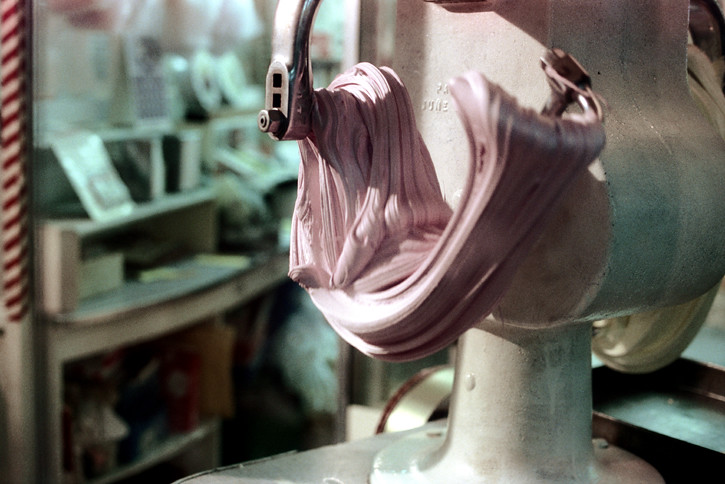 A Battle Over “Salt Water Taffy”

More candy-makers started selling salt water taffy in competition with Fralinger and James over the years, but there was one businessman that wanted to claim the name “salt water taffy” as his own. John Edmiston obtained the trademark for the name “salt water taffy” in 1923. He demanded royalties from any companies or businesses that were using the name. Edmiston specifically targeted the largest taffy producers, Fralinger and James. He claimed that he should be compensated since they were making a profit off of “his” name. However, the James brothers, Enoch’s sons, sued Edmiston over this demand. The Supreme Court settled the dispute.

In the end, they ruled against Edmiston because the name “salt water taffy” had been used by too many people for too long. The Supreme Court said that no one deserved the exclusive rights of the name. To this day, many candy makers claim to be the original crafters of salt water taffy. Ocean waves and years of history washed away the true ownership of the name. 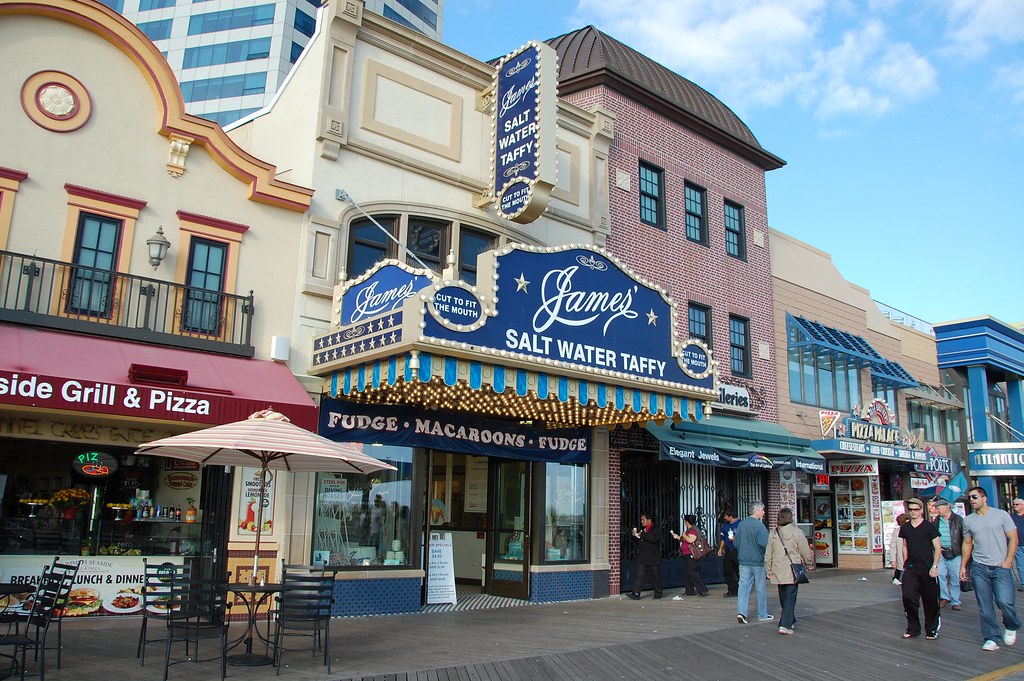 In the 1970s, Atlantic City experienced a surge of tourism when casinos became legalized. Because of this, more concerts and other large events started arriving on the famous boardwalk. As the city continued to grow, so did the buzz over salt water taffy. The candy has remained a hallmark of Atlantic City since its conception a little less than 100 years earlier. Even some celebrities indulge in the specialty sweet when visiting the Jersey Shore. Frank Sinatra once ordered 500 boxes of salt water taffy from a local candy shop in Atlantic City, the largest single mail-order of salt water taffy ever. The singer gave the candy to friends and family as a memoriam of his show in Atlantic City.

Salt water taffy remains significant to the Jersey Shore experience and its history. Today, the classic Fralinger and James brands are both now owned by James Candy Company in Atlantic City but have been kept separate from one another to keep their individual traditions alive. Not only do a number of confectionery and novelty shops sell salt water taffy up and down the New Jersey coast, but now, salt water taffy can be found all across the United States. However, for the Jersey Shore, the novelty behind salt water taffy keeps the treat popular among tourists and locals alike.

New Jersey – why is the state a nationwide front-runner for online casino play?