How Rutherford Has Changed In 2015, The New York Times featured the town of Rutherford, New Jersey in their “Living In” column. In an effort to depict what it would be like to reside there, they described the NJ suburb as a “quiet outpost beyond the tunnel.”

A few years later, in 2019, Forbes completed its own profile. It looked at Rutherford’s “appeal as a residential destination” for urbanites, mainly praising its robust and evolving downtown. Specifically, it pinpointed how the neighborhood’s “new millennium bricked sidewalks” and “coordinated storefronts” could now rival those of Montclair or Ridgewood.

Rutherford has changed—that’s abundantly clear. In fact, Rutherford is still changing. But I didn’t need either article to tell me that. I’ve seen what my hometown has gained, what it’s lost. Like the Forbes piece said, “It’s easy to feel sentimental about Rutherford.” Here’s why.

How “The Borough of Trees” Came to Be

In 1881, Rutherford became the first independent borough in Bergen County. It was named after former senator John Rutherfurd—note the difference in the spelling. At the time, the senator’s family owned most of the town’s farmland, making him one of the largest landholders in the entire state. Considering its namesake, “The Borough of Trees,” it should come as no surprise that many of the trees dotting Rutherford’s streets today were planted around that time. For this reason, it’s not uncommon to encounter trees (and houses) that date back at least 100 years.

Over the last century, Rutherford’s rural-turned-suburban setting has played host to many famous residents. Everyone from Pulitzer Prize-winning poet William Carlos Williams and sculptor Victor Victori to former New York Giants defensive end Michael Strahan. (I still remember when the latter moved in across the street from me.)

This is a question I’ve asked myself time and time again. For my parents, who moved here from Weehawken in 1992, it was for a taste of the suburbs. Considering how densely populated Hudson County was and still is, it’s not uncommon for commuters currently residing in Jersey City or Hoboken to find refuge in Rutherford. 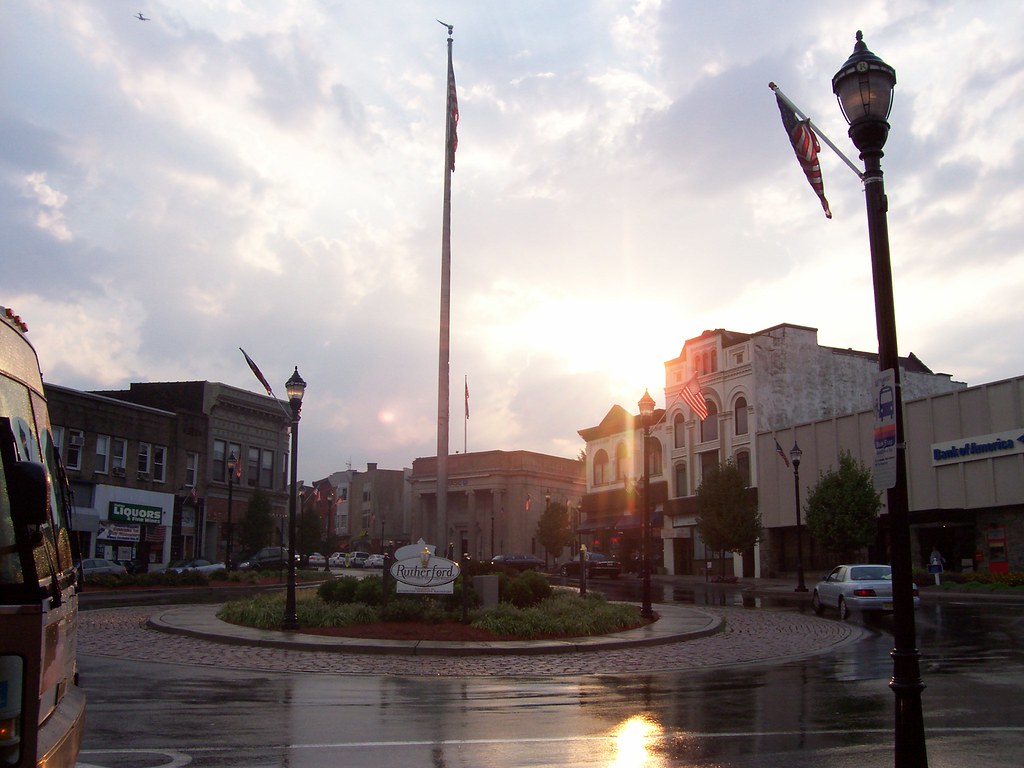 The tree-lined town is tucked in just enough from highways such as Route 3, Route 21 and Route 17. Without traffic, it’s 15 minutes from the Lincon Tunnel. Although, you’re always within walking distance to an NJ Transit bus or train line. An even shorter drive (under 10 minutes) will bring you to nearby MetLife Stadium and the newly-opened American Dream located in East Rutherford. Yes, there’s a difference.

Aside from being in close proximity to the city, young families have sought out Rutherford’s public and private schools, kid-friendly parks, walkable downtown and tight-knit community.

What Once Was vs. What You’ll Find Downtown Today

The downtown strip of Park Avenue has undoubtedly seen the most change. What sticks out the most in my mind (and quite literally if you pass it by) is the new luxury apartment building named The Parker. Vango Development completed the four-story project in 2019 and received approval in September 2021 to begin construction on an adjacent 60-unit building. The Parker in Rutherford, NJ l Photo by Abby Montanez

“We’re delighted to receive approval for the second building which will allow us to provide additional residential and retail opportunities along Park Avenue while deepening our commitment to the community at large.”

Just down the block is at 92 Park Ave. is a mixed-use building from Native Development. Rutherfordians might remember it as the former Mandee store before it was abandoned. However, it now houses several modern-looking storefronts including Stonefield, Harpy Gallery and my personal favorite, Suprema. Other notable new additions include Playa Bowls, Rutherford Pharmacy where Blimpie used to be and VIllage Wines, which replaced the former Village Gourmet. The latest establishment to open is a farm-to-table restaurant, Fiorentini, in the former Mambo Tea House space. (R.I.P.)

You’ll still find some oldies but goodies, you just may not recognize their updated exteriors. Goffins got a fresh coat of paint. Rutherford Pancake House had a complete renovation. Jim Dandy’s, which was nearly eviscerated by a three-alarm fire back in May, is totally redone. A New Age For an Old Town

While I’ll never forget walking past Dee-J’s Western Corral (lovingly referred to by many as “the cowboy store”), even in this new age, some of Rutherford’s most iconic Park Ave. businesses still remain.

There’s Varrelmann’s, an old-fashioned German bakery that has been operational for over 100 years. Cafe Matisse continues to wow visitors from all across the state, consistently ranking as one of New Jersey’s top destinations for fine dining. The Pet Center, where I got my first goldfish, is still standing. Even the Williams Center, a historic theatre whose future was notoriously uncertain, was recently saved from demolition.

To that point, I’ve learned that change doesn’t have to be inherently good or bad. It’s something that is inevitable—even if the town I once called home would never be quite the same.