An aerial view of Cattus Island

On a sleepy side street of Fischer Boulevard in Toms River lies an environmental hideaway named Cattus Island County Park. The park is technically only an island during high tide when its marshes flood, but it boasts a sprawling 530 acres of pristine coastal wilderness situated where the Barnegat Bay slices into the Ocean County mainland. After cruising through the park’s sprawling driveway, typically littered with once evergreen pine needles, guests are able to take advantage of the park’s offerings. Cattus Island boasts over seven miles of hiking trails, scenic views of the Barnegat Bay, and the Cooper Environmental Center. Cattus Island switched hands a few times throughout the late 18th and 19th centuries. In 1895, John V.A. Cattus, a wealthy Far East trader from New York, purchased Cattus Island County Park. In 1973, Ocean County spent $2.75 million to secure the property from his estate. But, locals weren’t happy about the acquisition. Vandals set fire to the remaining structures on the island to thwart the county’s original plan to develop campsites. Ocean County Freeholders eventually decided to leave the park as untouched as possible, allowing it to serve as a gateway to the local nature by clearing trails through the wilderness for visitors to explore. The park officially opened to the public in 1980, celebrating its 40th anniversary just this past year. An aerial view of Cattus Island

Presently, eight individual hiking trails weave throughout the park, giving visitors access to isolated bay beaches where the bustling traffic of Fischer Boulevard is replaced with the gentle lapping of waves on the pale sand and driftwood. For those that are more interested in getting acquainted with the local wildlife, the park is home to ADA accessible boardwalk trails throughout its marshes and grassland ecosystems.

The Flora and Fauna of Cattus Island

Along the boardwalk, the remnants of Atlantic White Cedars populate the horizon of the park’s swamps—preserving a natural desolation where once lush, green trees are relegated to emaciated gray stalks as the brackish water of the bay continues to inundate the park. Phragmites juxtapose these skeletal remains, which are an invasive species brought to the area from the United States’ trade with foreign countries that line the boardwalks. Traders used the leaves as packing material for crates of precious glassware and china. When dockworkers unloaded those crates in New York City and Baltimore, the plant’s seeds dispersed along the East Coast. 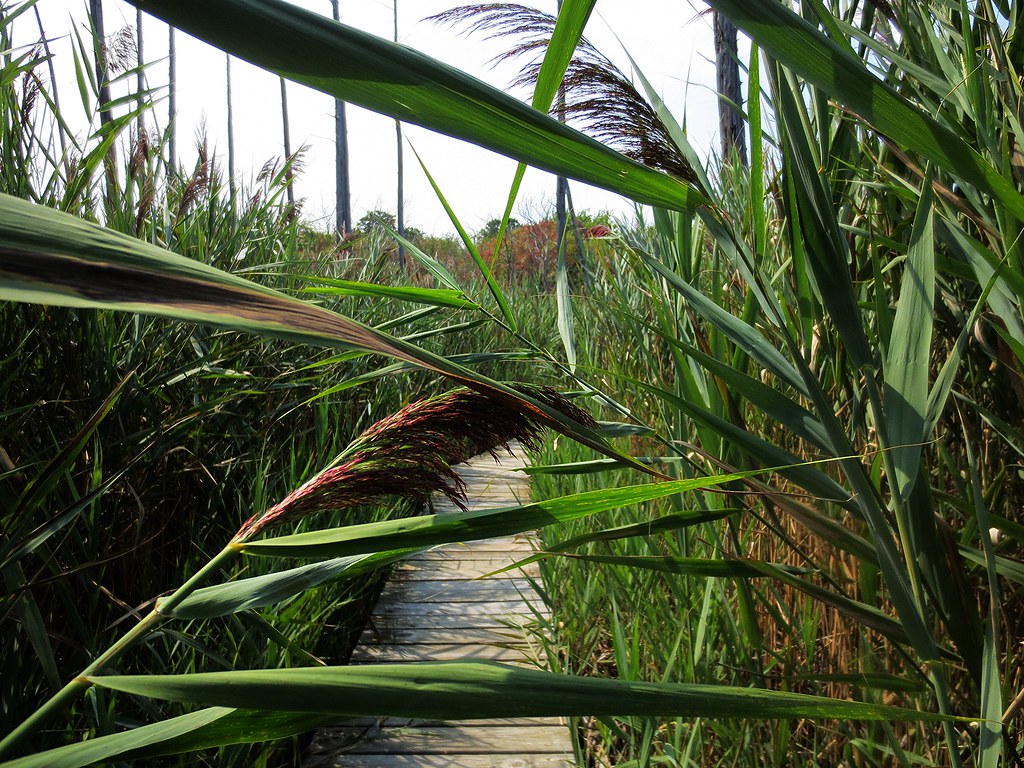 Birds are the most common visitors at Cattus Island. Visitors can take advantage of the park’s bird blinds to take a closer look.. Red Wing Blackbirds and Towhees are just some of the many species that dart through the park’s pine trees. Visitors frequently see ospreys; nesting platforms and feeding poles pepper the property, allowing the birds to shelter and nest in a protected environment.

Deer are also native to the park, and snack on the wild blueberry plants that produce fruit during the summer. Blue claw crabs and mummichogs make their home below the muddy surface of the salt marsh. Bacteria keep the marsh healthy by consuming detritus in the water, resulting in a pungent sulfurous smell.

The Cooper Environmental Center is Cattus Island’s main attraction, with exhibits depicting the park’s history and ecology. Storm surge from Hurricane Sandy completely destroyed the center in 2012. The center opened to the public again in 2017, after five years of reconstruction. In the exhibit room, displays with information about Ocean County’s wildlife line the walls opposite tanks of reptiles and amphibians. Patrons can meet Thor the Northern pine snake as he slithers through the branches of his enclosure and Jaba the snapping turtle patiently awaiting his next meal. Other live snakes, turtles, and frogs populate the tanks along the walls for the curious to learn more about their behavior and biology up close. 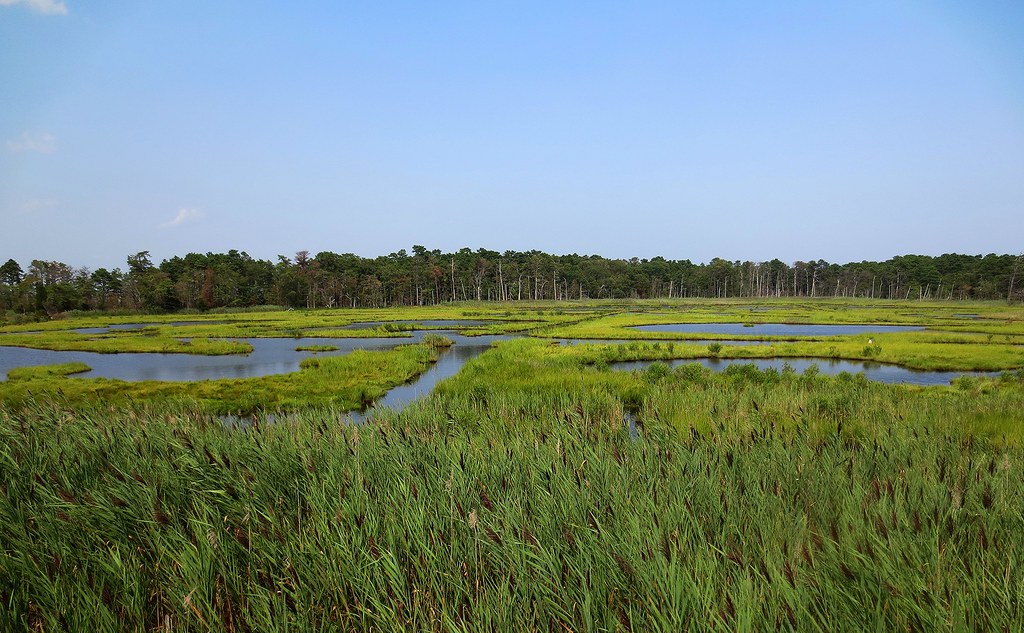 The exhibit room also holds two massive saltwater tanks. Naturalists took the fish in these tanks directly from the park’s salt marshes and the Barnegat Bay. A teaching tank sits in the middle of the room. Guests can touch live horseshoe crabs and clams while learning more about the park’s marine systems.

Outside the Cooper Environmental Center, feeders entice birds like New Jersey’s state bird, the Goldfinch. The center’s butterfly garden features over 30 different types of flowers to attract different species of butterflies. The flowers bloom in late spring and early autumn, providing nectar for the butterflies and protected real estate to lay their eggs. The center also features an observation deck and a telescope with incredible views across Applegate Cove into Ortley Beach. 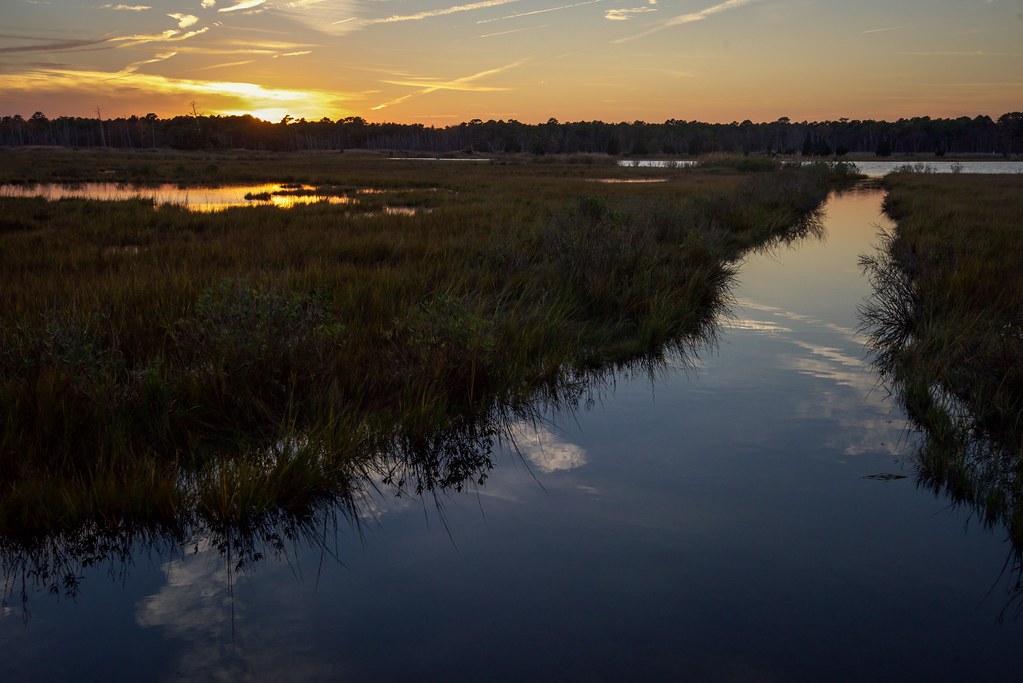 Cattus Island County Park is one of New Jersey’s sprawling environmental wonderlands—a microcosm of Ocean County’s nature and wildlife amongst some of the most scenic and picturesque hiking trails along the Barnegat Bay. More information on Cattus Island, as well as the county’s other offerings, can be found here or on Instagram @oceancountyparks.

7 Ways to Get Motivated To Study When Depressed

Fantastic article , I felt like I was walking the trails while Kevin described . Yes Cattus is a gem and so is Kevin Hurler.

Very Informative and well researched column. A haven for birders it looks like. I am only familiar with De Korte Environmental Center in Lyndhurst, NJ so this presents a sure fire excuse to explore the various hiking trails Kevin Hurler describes most enticingly.