Home Food I Traveled to Cambodia: Here’s Why
FoodTravel

Everyone dreams about their first big trip. Maybe it’s to the silky beaches of Aruba. The Eiffel Tower in Paris. For years, I intended to leave the United States so I could see these destinations for myself. I’d hardly left Connecticut, never mind the country. So I assumed my first ever flight would be to France or Italy. Despite these plans, I found myself landing 18 hours from home. Not in London or Venice. Instead, I traveled to the hot, bustling capital city of Phnom Penh, Cambodia.

Why I Traveled to Cambodia

Bordering Vietnam, Thailand and Laos, Cambodia is located in the southeastern part of the Indochina Peninsula. First established as the Khmer Empire in the 9th century, Cambodia was officially founded in 1953. Known for its palm sugar and religious history, the country is rich with culture. Due to its many alluring ruins, tourism is the main source of income. One of my primary motivators for visiting Cambodia was Angkor Wat, located in Siem Reap. Constructed in the 12th century by King Suryavarman II, Angkor Wat is the largest religious monument in the world and was once a Hindu temple, built as a palace of Vishnu. Covering 400 acres, the colossal ruin was built using intricately detailed sandstone blocks. At its center, a quincunx of towers stretch 65 meters high, creating a breathtaking sight.

In terms of weather, Cambodia has a rainy season and a dry season. The monsoon season brings 75 percent of the country’s annual rainfall, running from May through November. Luckily, I landed in March. Though, despite the dry season, the humidity never dropped below 70 percent in the 80-degree heat. But while the temperatures made activities strenuous, the sights and foods of Cambodia washed away any fatigue.

One of my first destinations in Cambodia was Angkor Wat. Weary eyed, our group left the hotel before dawn to watch the sunrise peak over the ruins. Standing by the water’s edge, I was captivated by the spectacle. The sun crept over the horizon, eventually hovering over the quincunx of towers and bathing it in hues of pink and purple. For a while, I sat there in silence before exploring Angkor Wat’s interior. I walked over the bridge, arriving at the temple’s arched door. Inside, every wall was etched with Khmer language and drawings of the Buddha. Each room was different, some vast and open, others cramped by statues and staircases. It was a labyrinth of smaller temples and open courtyards. Walking through Angkor Wat, I felt humbled and inspired by its age and magnitude.

Our group explored many temples, each providing a different experience. I rode on an elephant’s back around the Bayon Temple, making it easier to admire the peaking towers and architecture. At the Preah Khan temple, enormous trees sprouted from the ground, warping around the ruins in a collaborative harmony. One of my most invigorating experiences was climbing Angkor Wat’s “Stairway to Heaven.” Climbing on our hands and feet, our group braved the dizzying heights, arriving before a beautiful Buddha sculpture surrounded by lotus flowers. Ultimately, each monument was unique and equally awe-inspiring. Koh Tonsay Island, otherwise known as “Rabbit Island,” was my next stop. I arrived by boat and swam a good distance to shore–an excellent way to combat the heat. The waters were a brilliant blue, scattered with fish. I arrived at a local restaurant, sheltering from the heat under the large palm trees. Our group relaxed in swinging hammocks, enjoying a lunch of noodles and palm sugar juice and resting our legs from the taxing adventures. After speaking at length with the locals about our journey, we returned to the busy streets of Phnom Penh. During the nearly two weeks of my trip, I visited many more places, from museums to the 1970s Khmer Rouge’s concentration camps. A more serious element to the trip, the camps provided a tangible, painful reflection of the country’s war. From there, I learned local dances, explored wet markets, and sang songs on sunset boat tours. Truthfully, the sights of Cambodia changed me forever.

Unsurprisingly, the country had foods and smells I’d never encountered. When walking through the streets, my nose would detect a sudden horrid, almost rotten odor. I later learned that the perpetrator was durian fruit, described by locals as “smelling like Hell, tasting like Heaven.” If Heaven tastes like garlic and caramel, then the locals’ explanation was certainly accurate. Along the trip, our group also learned local recipes. During a cooking course, we prepared egg rolls and the traditional Cambodian dish, beef lok lak, from scratch. Beef lok lak is similar to stir-fry, with mixed vegetables and beef seared in soy and oyster sauce. Typically served with either rice or french fries, the dish was one of my favorites.

Our group tried each cuisine–from crickets to fish cheeks–creating an all-encompassing experience. I vowed to try every food I encountered. Although I stuck to my convictions, I found myself entirely unprepared for the town of Skuon’s menu.

Unbeknownst to me at the time, Skuon Village translated to “Spider Village.” On the way to explore ruins in Siem Reap, we stopped at the town, which we then learned was known for locally-fried tarantulas. Infested with spiders, Spider Village began eating the eight-legged critters to ease their invasion. As I hopped off the bus, I was bombarded with offers to try their delicacy.

The locals had large stands and baskets brimming with the furry, fried friends. Meanwhile, the younger children stealthily placed live tarantulas on our backs, either as encouragement or to watch us squirm. Hesitantly, our group agreed to try their dish. With clenched eyes, we ate the spiders’  legs. The texture was crunchy, almost like baked chicken skin, though the taste was somewhat unexplainable. At that moment, I promised never again to complain about my mom’s beef stew. 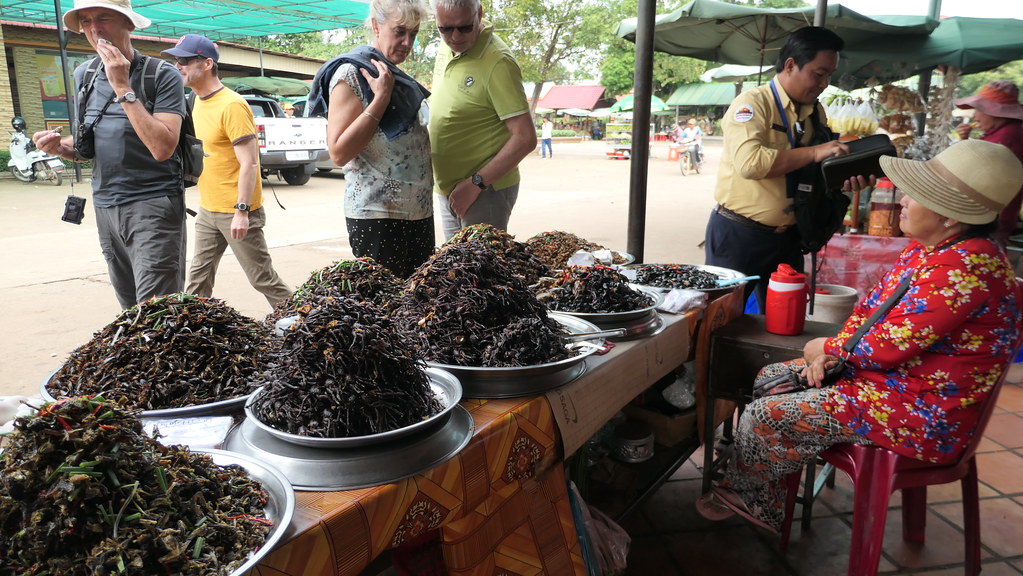 When I finally left Cambodia, I sensed a significant change in my understanding of the world. Despite my initial plans to visit beaches or modern cities, I returned home with no regrets.

Some things are unteachable, like the potent durian or the mesmerizing allure of Angkor Wat. From the moment my feet touched the soil of Cambodia, I felt my world broaden.

While I may one day still visit the Eiffel Tower or seek out silky sands, I believe the experiences of Southeast Asia will remain the most rewarding. From practicing breakdancing in the streets to avoiding the quicksand on Rabbit Island (some of us, anyway), I left Cambodia with memories I’d never create otherwise. Yet, I found the most unanticipated experiences were the ones that resonated the most.

Despite the simple living conditions, I found every local and experience radiant with life. Since this trip, I’ve continued to travel and experience the world’s hidden gems. While there’s beauty in everything, treasure often lies where others haven’t looked.

So, why go to Cambodia? Well, because those tarantulas won’t eat themselves!

Have you ever traveled to Cambodia? Tell us your story in the comments below!

Top 3 entertainment tips for restaurants, bars, and their patrons

The Best New Jersey Road Trips Everyone Has...

I love your beautiful story. You are such an amazing writer. Thank for sharing.

I am from Cambodia and reading articles like yours brings me comfort but also makes me want to hop on an airplane and go there. Oh how I miss my hometown. Thank you for sharing your experience.

I was privileged to travel to Seim Reap in March, 2019. Visiting Angkor Wat was at the top of my bucket list for years. I can happily report it did not disappoint. I was sorely tempted to sample the local street food but I resisted the urge. As a man in his 70s I was unwilling to risk illness so far from home. I fell in love with Cambodia and its people. I would love to go back for another visit.

Thank you for visiting and writing about Cambodia. Thank you for your time to experience the culture, history and food especially the tarantulas (lol).

I am Singaporean, live and work in Phnom Penh.
I like the article you wrote. It’s amazingly written. Yes, Cambodia maybe a third world country but behind this description, it has a very rich history.
The people generally are warmth, friendly, and helpful. Poor but generous too.
There I met my Cambodian wife and has two beautiful daughters.
This place is my second home and I love it