The Best Time to Surf in New Jersey? The Winter

It’s seven in the morning and under a gray sky along the Jersey Shore, surfers are emerging from the side streets of their beach towns. As they crunch through the sand, waves slam into the coastline and wash up the shore. The sun is finally beginning to cut through the night as it peeks over the water. The surfers sprint into the ocean, navigating the break and gliding effortlessly over the inky currents. Their whoops and laughs echo over the noise of crashing waves. There’s only one unusual thing about this—it’s the dead of winter.

The winter surf scene in New Jersey is a treacherous one. While the East Coast’s oceans can drop to 30-35 degrees Fahrenheit in the winter, cold water is not the only obstacle. Greater wind speeds in the ocean whip up waves to heights that are definitely not for groms (beginner surfers). The winter has substantial effects on the human body as well. Cold weather puts a lot of stress on the cardiovascular system, which, in a sport as exhaustive as surfing, is an important thing to navigate. Further, hypothermia is always a lingering threat as water temperatures below 50 degrees Fahrenheit can induce hypothermia in less than an hour. Despite these arduous conditions, it seems that winter surfing has only gotten more popular in New Jersey.

A Bunch of Numbskulls

Hunched over a laptop and watching a hurricane forecast, New Jersey native Rob Kelly plans his next move in a video for Numbskulls—a blog and video series documenting the Garden State’s winter surf scene. “The winds are gonna be good in the morning. The swell’s gonna be, like, just starting to show up, so I think it’s worth getting on at first thing.” The word “numbskull” is slang for “idiot,” but Kelly and his friends are taking it in a new (and colder) direction.

Andrew Gelser recounts his experience surfing during Winter Storm Grayson in New Jersey in 2018 with Kelly for Numbskulls. “That’s one thing I remember, the wind was so strong and the snow was moving horizontally. Like, when you paddled for a wave, you were paddling straight into the wind, you almost lost sight.”

Kelly and his crew effortlessly sail through the imposing storm surge of offshore hurricanes and winter storms. Their silhouettes are almost indiscernible behind the crashing of deep blue waves and flecks of snowfall. “Total whiteout conditions, [you] couldn’t even see 10 feet in front of you,” Kelly remembers.

Kelly calls Ocean City, New Jersey his home but has surfed the winter swells up and down the state’s coast. To the uninformed, Kelly and his friends are definitely numbskulls. But to them, they are taking advantage of prime surfing opportunities without letting the cold get in their way. “Winter’s coming, bigger swells, no crowds. It’s all just bittersweet.”

So what do you do if you want to take advantage of some pumping winter waves? If you’re new to surfing, the first step is easy: don’t. Between the sheer height of the swells, the unpredictable ocean conditions, and biting winter weather, new surfers are likely to be overwhelmed. Newbies should take the winter off, and concentrate on practicing throughout the summer. But, if you’re ready to take on Mother Nature’s winter fury, here are some tips. 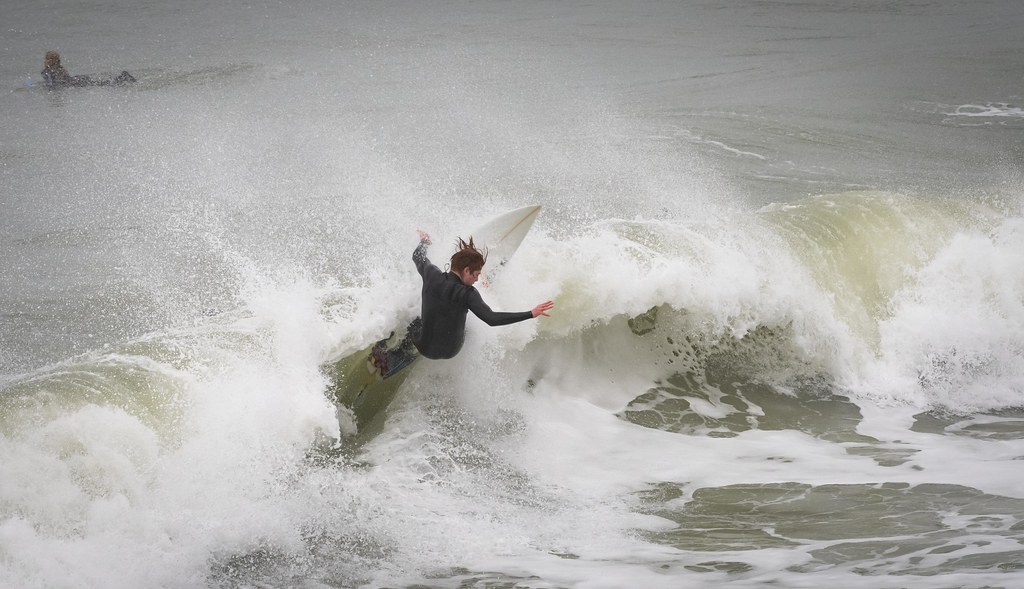 A good wetsuit is arguably more important than a good board. Investing in a wetsuit that’s comfortable and warm is crucial—five millimeters thick is usually a good bet. A wetsuit alone is not enough, however. Quality boots, hoods, and gloves (sometimes referred to as “lobster claws”) are the key to staying warm and safe. While you’re at it, double up on everything so you always have a dry set to change into. Also consider investing in a thicker board, since winter waves are inevitably stronger and tougher than those in the summer.

Apart from the gear, winter surfing is all about mindset and community. Since the weather is so uncomfortable, having a bad attitude will only make your winter surfing experience more of a challenge. Staying open-minded as your teeth chatter is important to maximize the enjoyment of your session. With that, finding friends in other winter surfers will also help you stay committed to overcoming the weather and keep you enjoying the offseason.

What’s been your winter surfing experience in New Jersey? Let us know in the comments below.

Meet Grace Kerlin, A NJ Singer-Songwriter With An Old Soul