Craft Beer at HopsScotch in Jersey City: Behind the Scenes

Craft Beer at HopsScotch in Jersey City: Behind the Scenes

The popularity of craft beer continues to rise in Jersey City, and that is thanks in large part to all of its great watering holes such as The Iron Monkey, Barcade and, of course, HopsScotch. Located in Downtown Jersey City on Washington Street, HopsScotch brings in some of the rarest and most exclusive brews from around the globe. With all the craft beer buzz in town, owner Luke Gomez and his staff don’t want to miss a beat.

HopsScotch is where beer nerds go to graduate. Forget those consumer king, mainstream lagers you drank in college, because once you’ve had a smoked stout from halfway around the world, you may never go back. If it’s limited edition, and there’s only 70 bottles of it in the U.S. — you can be sure HopsScotch got it.

Luke lead myself and a couple of the Digest’s finest behind the gold curtain, to check out where HopsScotch keeps their brews cold — or as Luke put it “his stash.” The first thing I noticed upon entering the walk-in, other than the chill, was how small I felt compared to all that beer. For a moment, I was the beer version of Edmond Dantés discovering the Mad Priest’s treasure. There were too many kegs to count, each label naming cities from all over the world. From simple classics like Founders Dirty Bastard and Allagash White: Anyone have a tap?

To the first Icelandic beer to ever hit U.S. turf, Ölvisholt Brugghús’ Lava: The only thing more impressive than the kegs at HopsScotch were the bottles. Luke and his team remain loyal to the success of craft beer, not just at HopsScotch, but everywhere in Jersey City. It wasn’t long before my hands found their way to a bottle of the limited edition Schneider Weisse Tap X Aventinus Cuvée Barrique — a German weizenbock aged in oak barrels with red wine: Before long, it was sampling time. My favorite hops of the evening was BFM’s Tarry Suchong (which had perhaps the most creative looking bottle), a smoked amber ale made with tea from Switzerland. I could barely see through the opaque, reddish brown hue, which had a smoky taste to match its smell: HopsScotch may have an unrelenting conveyer belt of unique bottles and kegs, but the beers aren’t the only thing. It’s also a great after work community with savory bar fare, throwback board games and of course, great scotch. As I sat there, Lebanese Pale Ale in hand, I knew HopsScotch was far from the usually cookie cutter bar. After only a few drinks I felt like I could see myself becoming the slightly less fluffy Norm Peterson of HopsScotch.

Spending time at HopsScotch in Jersey City reminds us responsible adults to let loose and enjoy life. In there they’re going back to the basics: friendly staff, fun atmosphere and a great product. Luke and the team seem to be on top of every detail, from making their own maraschino cherries to cleaning their tap lines daily. HopsScotch is a place where you check your stress at the door, roll up your sleeves and have a good time. You might even find yourself playing Jenga like a kid, but at least you’ll be drinking like an adult. Needless to say, they haven’t seen the last of me.

Look for the HopsScotch international beer 411 in the Digest’s annual Restaurant Guide this month! 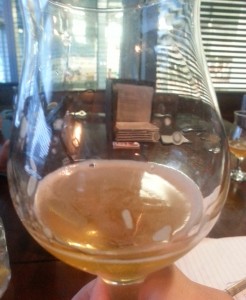 Get Your Green On: St. Patrick’s Day Weekend in Hudson County