June 19th marked the eighth anniversary of James Gandolfini’s death. If you don’t know James Gandolfini, chances are you’re either not from New Jersey, or haven’t seen his legendary performance in the hit HBO show, “The Sopranos.” When most of us think of Gandolfini, we think of a character that challenged our morals and integrity, as in each episode, our hearts harbored a special place for the murderous, crime-committing protagonist. But James Gandolfini was more than TV’s original antihero. He was a talented and hard-working actor, a genuine and modest man, and someone who left behind a lasting legacy. Simply put, James Gandolfini was a New Jersey icon.

Gandolfini was never one to have an inflated view of himself (no pun intended), but he, of course, was so much more than his blunt characterization. Before James Gandolfini became a New Jersey icon, he had to make his bones in the Garden State first.

Gandolfini was born in Westwood and grew up in Park Ridge. Both of his parents, of Italian descent, were known to be strict Catholics who spoke Italian at home. Gandolfini characterized his family as an honest, hard-working, blue-collar family. After attending Park Ridge High School, where he was an athlete and performed in school plays, Gandolfini went on to Rutgers University. He graduated in 1983 with a BA in Communications and moved to New York City after graduation. Like many would-be New York City actors, Gandolfini took jobs in the bar and nightclub scene while eventually attending some acting classes and performing small-time work on the side.

He considered his first big break in the business to be when he landed a role in the Broadway production “A Streetcar Named Desire” in 1992. Soon after, his on-screen career would take off after landing a role in the star-studded movie “True Romance.” Despite sharing the screen with A-listers such as Christian Slater, Patricia Arquette, Dennis Hopper, Brad Pitt, Christopher Walken and others, Gandolfini’s performance as a mob enforcer stood out (I know, hard to imagine).

The film opportunities began to roll in after “True Romance,” and Gandolfini showed he was more than just “a fat guy from Jersey.” He landed roles in several notable films like “Terminal Velocity,” “Crimson Tide” and “Get Shorty,” playing a Russian mobster, Navy Lieutenant and a Southern accent-donning stuntman, respectively. Gandolfini was no longer the Jersey guy who stumbled into acting; he was a true actor and would soon change the future of television. Gandolfini in “Get Shorty” / Credit: MGM

“The Sopranos” was finally picked up by the premium network HBO in the late ‘90s. David Chase had previously pitched it to other prominent television networks but was unsuccessful. The Garden State-bred Chase envisioned a television series centered around Tony Soprano, a New Jersey-based Italian-American mobster, trying to manage his dueling family lives: his blood family and his mafia family. In retrospect, it seems Gandolfini was born to play this role, but in reality, he needed a few twists of fate in his favor.

He originally was called to audition after the casting director saw a clip of his performance in “True Romance.” In a 2013 interview with The Guardian, Chase recalled that Gandolfini actually stopped and left mid-audition, claiming he wasn’t prepared enough and asked to give it another shot when he was. Chase gave him that shot in his garage later that night, and the rest is history. It’s pretty remarkable how haphazardly Gandolfini landed this role of a lifetime and how close we were to missing out on the TV series of the century. Even Chase has been quoted saying, “without Jim Gandolfini, there is no ‘Sopranos.’ There is no Tony Soprano.”

It didn’t take long for “The Sopranos” to become a mainstream sensation. The HBO series essentially broke every rule in television, and audiences couldn’t get enough of it. The authenticity of the show was unmatched, as it emphasized New Jersey actors and shooting throughout North Jersey for the show’s entirety. But no element of the show was as groundbreaking as the show’s lead man, Tony Soprano, television’s original antihero.

An antihero is a main character that essentially doesn’t have any heroic qualities. Such characters had been pulled off in movies, like in “Taxi Driver,” but before “The Sopranos,” they were considered a suicide mission for television. Tony Soprano was the original success. He was a criminal, a murderer, an adulterer, a bully and everything in between, yet viewers couldn’t help but root for the man.

What made Gandolfini’s portrayal so unique was its simplicity and authenticity. You didn’t need to be from New Jersey to feel Gandolfini’s Garden State roots in his performance. Tony Soprano felt so genuine that it was more challenging to imagine Gandolfini as real and Soprano as fake. Every fan likely remembers the first time they saw Gandolfini playing in another role and wondered why the hell Tony Soprano was acting in a movie and talking differently.

The love viewers felt for Tony was primarily aided by one of the recurring elements in the show: countless deep scenes between him and his therapist, Dr. Melfi (Lorraine Bracco). These discourses served as the backbone of the entire series. They gave us some of the most memorable scenes of the series as Dr. Melfi and Soprano volleyed back and forth. These scenes were simultaneously emotional, humorous, and intense. And they started like that right from the beginning; as early on, we were given the infamous line from Tony that he was a “waste management consultant” in response to Dr. Melfi’s probing into his professional endeavors. Bracco and Gandolfini, when together, put on true masterclasses in performance.

Even Gandolfini said himself in a 2004 interview: “I think those scenes made the show. They were kind of like the ancient Greek chorus, which allowed the audience to experience what the character was experiencing. I think these scenes let you into Tony’s head, bringing him a little closer to the audience.” In the time between the end of “The Sopranos” in 2007 and his death in 2013, we got to see Gandolfini’s depth as an individual. He starred in a few plays, took on supporting roles in several movies, and even directed and produced. He immediately displayed a knack for directing, with his documentary “Alive Day Memories: Home from Iraq” being nominated for an Emmy in 2007.

While much of his post-Sopranos work is noteworthy, this documentary is particularly exemplary for demonstrating his character. The documentary concerned injured Iraq War veterans and the struggles they encountered. What’s remarkable is not just its focus, but also its timing. In 2007, Gandolfini was coming off the end of one of the most famous TV shows of all time in which he, the lead man, changed what’s possible in television. He was a worldwide celebrity that could’ve done just about anything he wanted in show biz, and he decided to direct a documentary about wounded soldiers during a time our country was at war. If that’s not a selfless man, I don’t know what is. 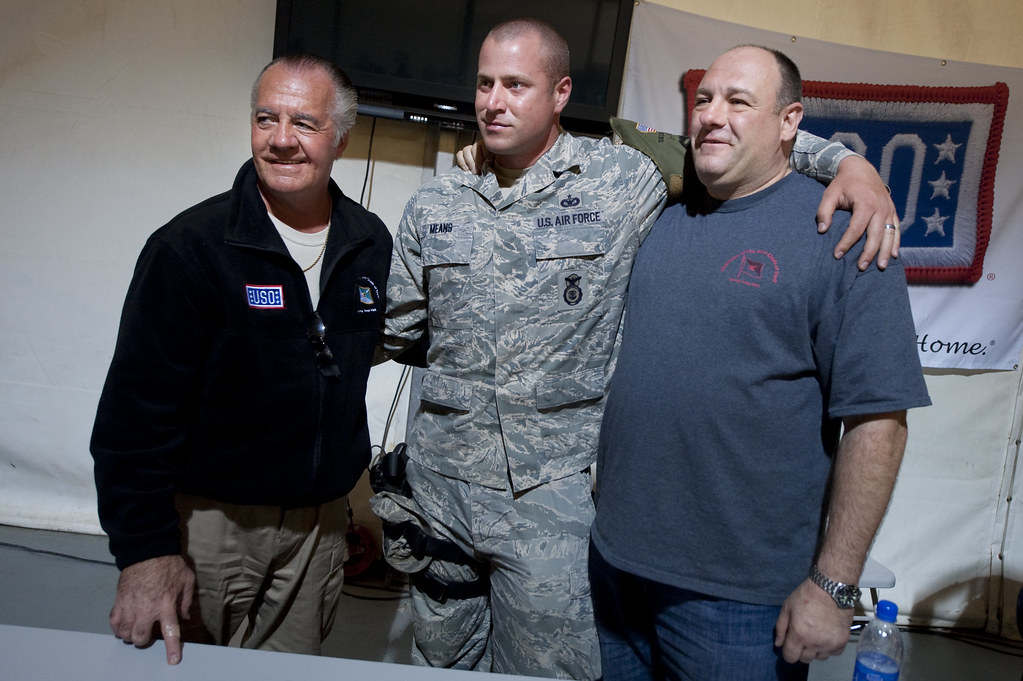 Those who knew Gandolfini typically referred to him as “Jim.” Though he hardly seemed to be acting as Tony Soprano, Jim and Tony are not the same. They were quite contrasting characters. The charm, the New Jersey roots, and the deep eyes, those Jim and Tony shared. But the man behind the act, Jim, couldn’t have been more contrary. Jim considered himself to be a boring, average guy, so much so that he rarely did interviews because he thought people wouldn’t like him anymore. He did, however, sit down for a rare interview back in 2004 in which he was quoted saying: “A lot of young actors get interviewed and go on television, and it makes them start to think that they are important. And we’re not, not anymore than anybody else.”

Despite James Gandolfini being a New Jersey icon in the eyes of many, he often referred to himself as “boring” and “average.” He didn’t want to be looked at as someone special, but rather just a regular guy. In the few interviews Gandolfini participated in, there were always common elements of his character that were immediately apparent. “Jim” had a token New Jersey charm, unwavering humility and genuine kindness. Tony was impulsive, emotional and tempered, while Jim came off as thoughtful, peaceful and compassionate.

But enough of my assessments of his character. Those who knew him can offer much better analysis. Disclaimer to “Sopranos” fans: watching this video may stir up emotions.

James “Jim” Gandolfini, a true New Jersey icon, will never be forgotten. He’ll be remembered as a man that changed television, as a staple of the Garden State, and as an even better person than he was as an actor. But of course, to most of us, he will always be Tony. And despite the controversy, the highly debated ending of “The Sopranos” couldn’t have been more fitting, in retrospect. Though it was gut-wrenching and perplexing in the moment, it’s beautifully poetic when you consider it now. We lost Gandolfini far too soon, but Tony Soprano and Gandolfini’s legacy live on forever. A New Generation of Television

Nowadays, antiheroes are more of the norm than traditional lead acts. For us younger audiences, it’s challenging to visualize how transformational “The Sopranos” and Gandolfini were for television. Were it not for Tony Soprano, TV, as we know it in 2021, would not be the same. He ushered in a new generation. Without Tony Soprano, there is no Walter White, Don Draper, Francis Underwood, etc. Nearly all of our favorite binge-worthy shows have Gandolfini to thank, as, without him, they wouldn’t exist. This quote from TV critic Alan Sepinwall really captures Gandolfini’s television legacy:

“…in the years since ‘The Sopranos’ ended, there’s almost been this TV-actor Mount Rushmore. Bryan Cranston [‘Breaking Bad’] is on there, and Jon Hamm [‘Mad Men’] is on there, and Elisabeth Moss [‘Mad Men,’ ‘The Handmaid’s Tale’] or Claire Danes [‘Homeland’] or somebody else is on there. But James Gandolfini gets his own mountain. With all due respect to everybody else, including Edie Falco [who played Tony Soprano’s wife, Carmela], Gandolfini is the best dramatic actor in TV history, and I don’t know that anybody else is particularly close.”

NJ All the Way

Gandolfini never strayed far from the Garden State. He either lived here, in the city or shared time between Jersey and elsewhere throughout his life. As a kid and as a celebrity, he continued to cherish escapes down The Shore. He remained that rugged, blue-collar guy with the Garden State charm till the end. New Jersey is no stranger to breeding famous people. Yet, how many continued to embody their Jersey roots after Hollywood and worldwide fame? Gandolfini was in a league of his own.

Following the announcement of his death, Governor Chris Christie ordered flags at half-staff throughout the state. In 2014, Gandolfini was posthumously inducted into the New Jersey Hall of Fame, a well-deserved honor.

If James Gandolfini isn’t a true New Jersey icon, then who is?

If you could use some more Gandolfini content, I highly recommend this short documentary on him. See for yourself who he was as a person.

What You Need to Know About SopranosCon...