Home Blogs Whose Idea Was This Anyway? The Bizarre History Behind Our Favorite Christmas Decor
BlogsLifestyle

Whose Idea Was This Anyway? The Bizarre History Behind Our Favorite Christmas Decor

The holiday season in America means something different to everyone. To some, it’s the most wonderful time of year (or perhaps the most stressful); to others, it might be another demonstration of American capitalism. Whatever the season means to you, we can all agree on one thing: it’s full of bizarre, sometimes humorous traditions. No holiday demonstrates this better than Christmas. The most wonderful time of year is about mood and aesthetics, often more so than being about Christmas Day itself. Despite all of the peculiar rituals this time of year, none are as famous as the traditions of decorations.

The time, money and effort put into Christmas decor is something to behold, but we can’t help ourselves; it’s not the same without them. The history of decorating is passed down from earlier generations, and often quite literally, as grandmas relish the opportunity to rid themselves of even more of their belongings. Though many Americans religiously engage in these staple decorating traditions, most of us don’t know why or where they come from. As much as some might like to blame America’s unwavering need to commercialize everything, many of these traditions have origins much deeper than that. Some are even hundreds of years old, with roots beyond America. With that said, let’s take a look at the largely unknown history of some of the most classic Christmas decorating traditions. Perhaps the most famous holiday tradition of all: the Christmas tree. The practice of decorating trees dates back to the Middle Ages in Germany. European settlers then popularized this tradition in America in the 19th century, as the first Christmas tree lot opened in 1851. Today, roughly 80 percent of U.S. households use artificial trees instead of the real deal. I can confidently say that I’m now disappointed in 80 percent of Americans. Sorry everyone, but I’m prepared to die on my shrinking real-tree island. Some of you might balk at the inclusion of this one, but I’d argue candy canes are just as much of a decoration as they are a popular holiday treat. The origin of candy canes goes back to Germany from around the 17th century. There is one man responsible for their arrival and prominence in America: August Imgrad. An immigrant from Germany, Imgrad started the trend stateside in 1847 in Wooster, Ohio by placing candy canes on trees, or so the story goes. Interestingly enough, candy canes used to only be white for some 200 years, with the iconic red stripe emerging in the early 20th century. Nowadays, 1.76 billion candy canes are produced every year in the U.S., as dentists everywhere have nightmares about this cavity producer. Do you ever wonder what the deal is with those big red flowers you see everywhere during the Christmas season? Yeah, me too. If you don’t know by now, these flowers are known as poinsettias (at least in the U.S.) and have solidified themselves as the Christmas flower in America. Just like many of the other traditions, these flowers didn’t originate in the States; they’re actually historically native to Central America. 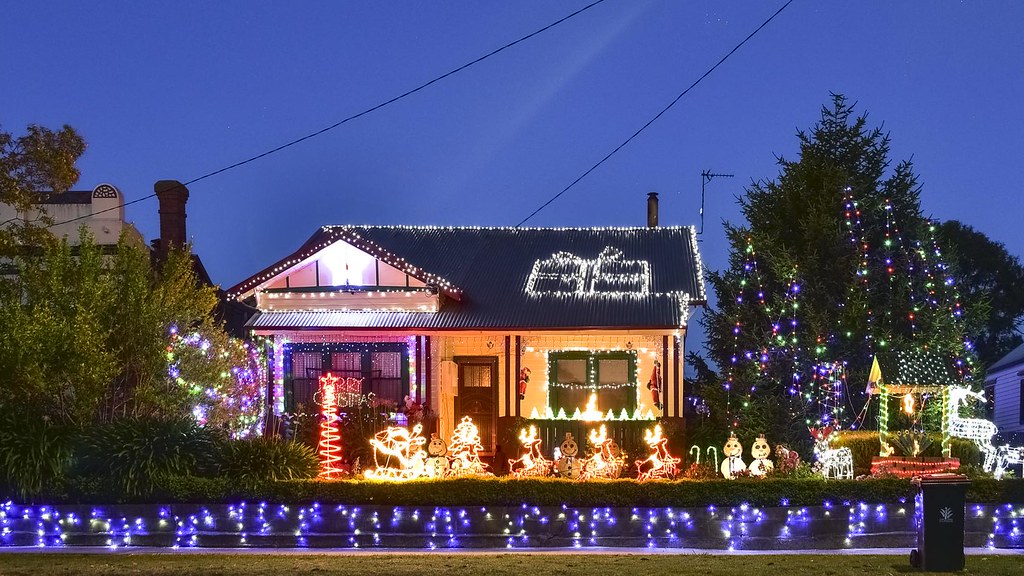 The tradition that has us all thankful for blackout curtains and possibly has caused more conflict between neighbors than just about anything else: the infamous Christmas lights. Disgruntled suburbians everywhere have Edward Hibberd Johnson to thank for this one. He had the idea back in 1882 to wrap them around a Christmas tree, and by 1914, lights were being mass-produced in the States. The lights have become something of a spectacle in modern times, with light shows at popular houses drawing crowds from far and wide. Like many other Christmas traditions, an entire industry has built up around these lights, with 150 million sets sold in the U.S. each year. They’ve even become a staple of comedy and pop culture, with movies like “Deck the Halls” and “National Lampoon’s Christmas Vacation” wonderfully displaying the comedic undertones of this tradition. Another Christmas decoration seen in homes, office spaces, and just about anywhere else across the country: door wreaths. The origin of wreaths dates back to ancient Greek and Roman times. Wreaths served as gifts that symbolized good health and fortune in these ancient cultures. The Christmas wreaths we see on doors today, embodying a circular shape often with red ribbon and plastic berries, stems from the holiday’s Christian meaning. It’s believed the berries were added to symbolize the blood of Christ. Whatever they mean to you, chances are you’ll have one in your house.

Classic for Whom? How Indigenous Peoples Celebrate The Holidays