An Iridescent Bubble: The History of the Atlantic City Boardwalk

New Jersey’s resort capital of Atlantic City sees approximately 27 million visitors annually. Every year, those millions step onto the city’s premier tourist attraction: the Atlantic City Boardwalk. Considered to be the world’s first and longest wooden boardwalk, the attraction’s history is intrinsically tied to the city’s own development.

Like many East Coast settlements, the place that would later become Atlantic City was home to an indigenous Native American tribe called the Lenni Lenape. They called the island “Absegami,” which meant “little water.”  Future settlers later anglicized the name into present-day Absecon Island.

Early settlers in the New World ignored the island due to the fact that it could only be reached by boat. But, by early to mid-1800s, their attention was drawn to the island’s beaches and breezes. Many believed that these could become part of a large-scale tourist attraction. In 1850, a physician named Dr. Jonathan Pitney proposed developing a resort on the island, struck by its beauty and potential. But more than a resort, the island needed to become a city if it was to function.

Dr. Pitney decided to secure a railroad in 1852. Two years later, in 1854, he helped create the Camden-Atlantic rail line. The first train cars rolled in from Camden on July 1, 1854, officially opening the resort for business. The line allowed people from not only across New Jersey but also the burgeoning nation, to come visit the city. Soon the area became a popular summer resort and winter health spa. The same year that the rail line opened was also when Richard B. Osborne, a civil engineer, designed and named the city, Atlantic City.

For much of its early history, Atlantic City had no boardwalk. Railroad cars and hotels simply sat alongside the same sand dunes that the Lenni Lenape had called their home. This proved cumbersome, however, as sand routinely found itself in these places of business, upsetting owners and tourists alike. 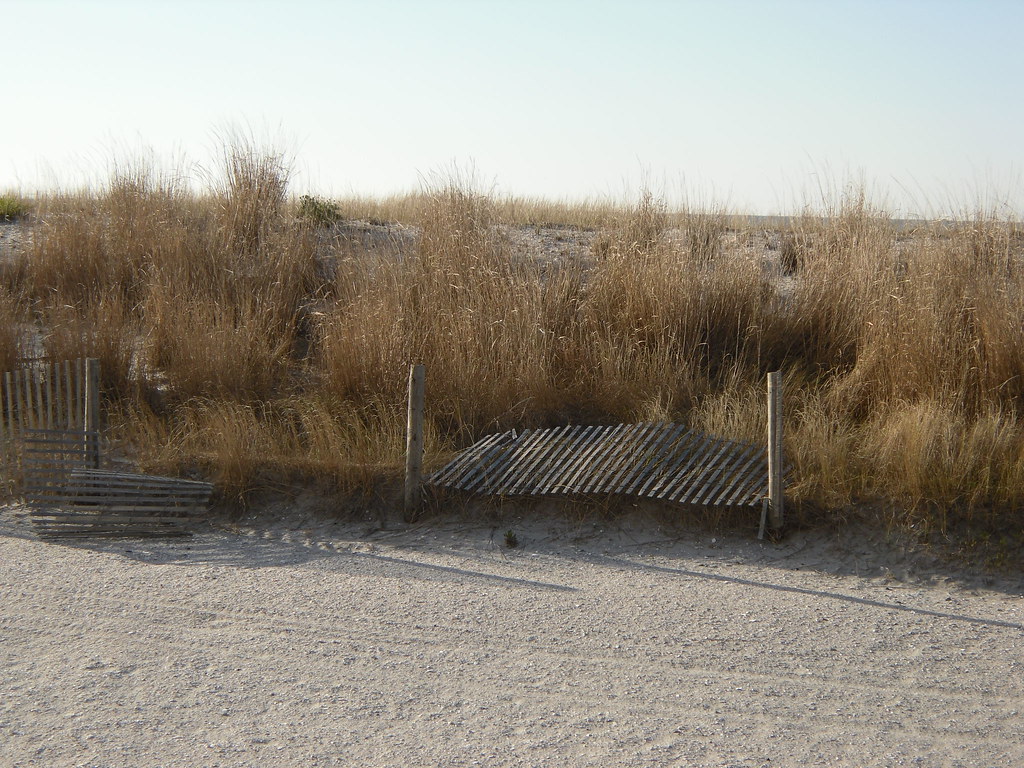 A temporary solution came in the form of a proto-boardwalk design called a footwalk, proposed on April 25, 1870. The design transformed into a wooden boardwalk constructed on June 16, 1870, costing $5,000. It was built 10 feet wide with sections of 12 feet each. However, it was meant to be temporary and could be dismantled during the winter. It also was not high enough to fully avoid the sand. Additionally, stores and other areas of commerce could not be within 30 feet of the footwalk. This meant that customers who were interested in going from storefront to beachfront and vice versa could not do so without tracking sand everywhere.

Alexander Boardman, a railroad conductor, and Jacob Keim, a hotelier, were struck by this issue. They proposed an alternate footwalk design to address it. This design was also made of wood, but the wooden planks were arranged in rectangular patterns known as herringbone patterns. The planks were further laid on a substructure of concrete and steel. The completed boardwalk was eight feet wide, one mile long, and stood one foot above the sand. It was still able to be packaged during the winter when the tourist season was at its lowest.

While the first iteration of the Atlantic City Boardwalk was a humble feat of engineering, it was never meant to stagnate. Constant improvement and additions to the attractions available in both Atlantic City and the beach itself meant the boardwalk would undergo many transformations. 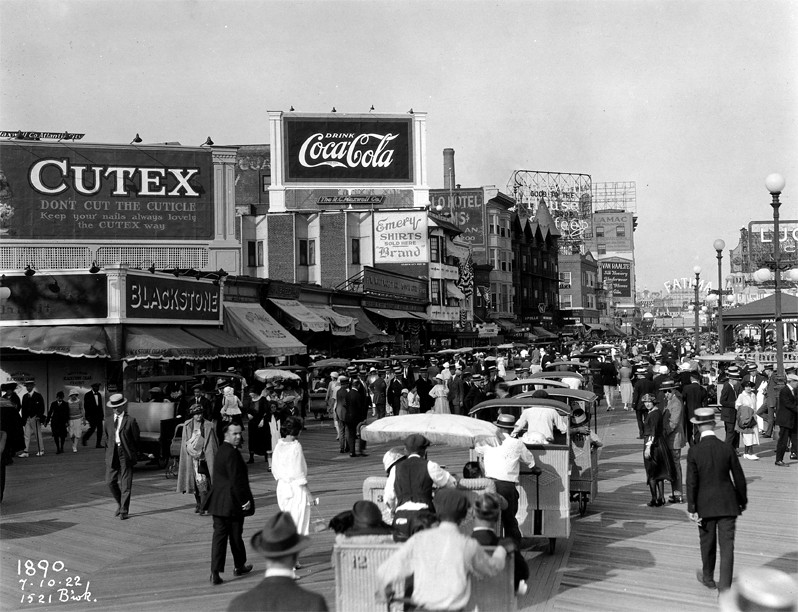 Post-Civil War society marked many transformations which included Atlantic City and the Boardwalk. The second iteration of the Boardwalk, built on June 1, 1880, began to feature more hotels, amusement piers and electrical signs, effectively beginning the modernization of the island. But the Boardwalk’s third, fourth, and fifth iterations, built between 1884 and 1896, saw the greatest amount of change. It extended each time; for instance, after its third reconstruction, it was now 20 feet wide, two miles long, and stood five feet above the beach, though it featured no railings yet.

Specifically, the Boardwalk went through five reconstruction efforts throughout its first 40 years. The third iteration was built on June 1, 1884. The fourth, May 10, 1890, and the fifth, July 8, 1896.

These reconstruction efforts were done to provide better access and stability, allow a greater number of developmental projects to flourish and to address hurricane damages over time.

The late 1800s gave the Atlantic City Boardwalk several new attractions, some of which can still be found today.

In the years between then and the fourth iteration, the Boardwalk was introduced to a popular present-day form of transportation called the rolling chair. These chairs, which resembled late-1800s wheelchair designs, arrived in Atlantic City in 1884. Merchant William Hayday began renting them in 1887 to vacationers and even had attendants push the chairs across the Boardwalk’s length. For a while, rolling chairs were the only form of vehicular transportation allowed on the Boardwalk. By 1891, the City had licensed them and charged $10 per chair.

The 1890s featured the development of several piers that added onto the Boardwalk’s growing length. The first was Young’s Pier, an enormous amusement pier that’s now called Playground Pier. Other piers included Central Pier, Pier Ships and Garden Pier. The acceptance and widespread use of rolling chairs allowed visitors to travel between these piers easily. One of the most prominent, however, was Steel Pier. Opening in 1898, it was named after the iron pilings that were driven into the ocean ground and topped by steel girders. It stretched 1,621 feet from the Boardwalk. Despite its industrial appearance, it was actually used as an entertainment venue from the 1920s to the 1950s. Famous bands and musicians performed in its concert halls. Given its entertainment center status, it was crowned the “Showplace of the Nation.”

A fire broke out in 1982, leading to the Pier’s attractions being nearly wiped out. In 1993, it was revived as an amusements-only attraction and features rides and other family-friendly activities. It remains one of the Boardwalk’s premiere piers and continues to attract vacationers regularly.

Arguably, the Boardwalk reached its peak in the 1920s. The Roaring Twenties, which positioned America as an economic superpower following the end of World War One, brought with it the emergence of the “celebrity” culture. This proved especially important for the Atlantic City Boardwalk, whose reputation as the entertainment center of the East Coast appealed to many would-be stars looking for a step into Broadway and Hollywood.

However, the Boardwalk’s economy was tourism-based. This meant it slowed during the winter. Rather than accept this, however, Atlantic City businessmen decided to create a beauty contest that would extend the summer season beyond Labor Day. Beginning on September 8 and 9 in 1921, the city introduced the Atlantic City Pageant, which would later become the Miss America Pageant.

The richness of the 1920s and the fact that one could go to the Atlantic City Boardwalk to experience the latest fashions, music, parades, stunts and shows led to the New York Times declaring in 1929 that it was “A magnificent proof of America’s newly found wealth and leisure. It is an iridescent bubble on the surface of our fabulous prosperity.” This wasn’t meant to last, of course. On October 24, 1929, the stock market crashed and the Great Depression began. 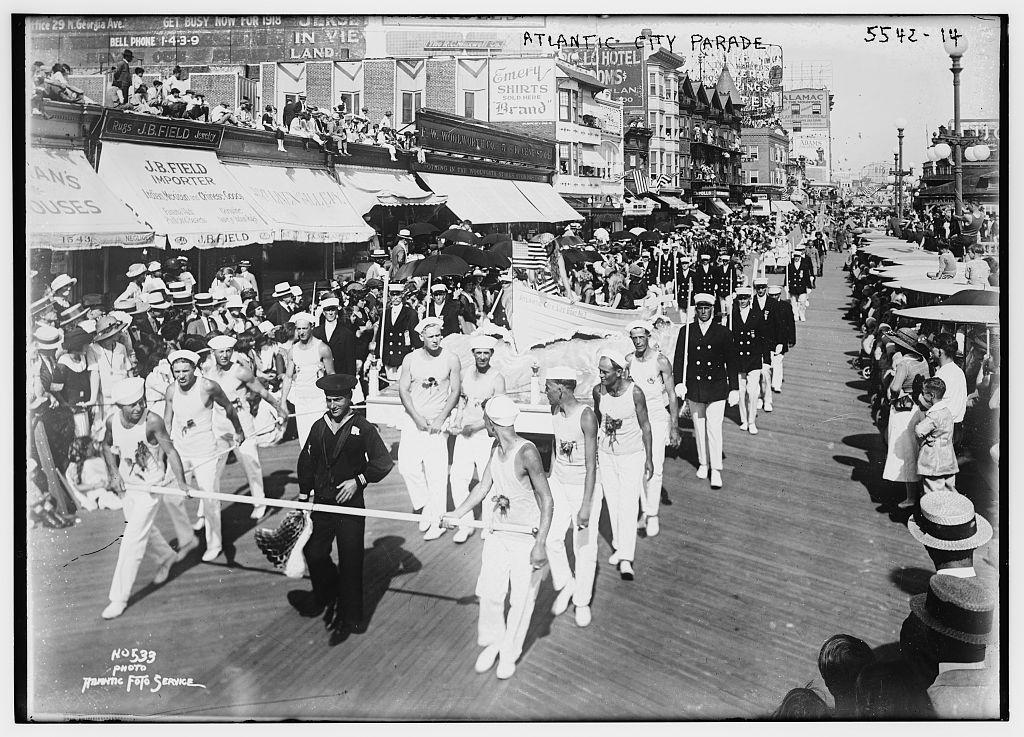 Even during the Great Depression, Atlantic City managed to still attract swaths of visitors. It had an active nightlife, which consisted of Club Harlem and other jazz attractions. Speakeasies were popular throughout the late Prohibition-era, too. And in World War Two, Atlantic City was recommissioned into a training site for recruits, and a recovery hotspot for wounded veterans.

The Great Atlantic Hurricane of 1944

Though it weathered the Great Depression and the start of World War Two in 1939, the Atlantic City Boardwalk faced its greatest challenge in 1944. It wasn’t because of the threat of German U-Boats which made the American public scared of going to the beach. Instead, it was a threat that had long plagued the East Coast: hurricanes.

The Great Atlantic Hurricane struck the Atlantic seaboard of the United States in September 1944. Classified as a Category 3 or 4, the hurricane had winds upwards of 75 miles per hour and gusts greater than 100 mph. It traveled west-northwest from Puerto Rico to New Brunswick, Canada. The U.S. suffered more than $100 million in damages and killed 390 people.

The Boardwalk wasn’t spared. As the storm rampaged across the East Coast, it ransacked the walkway and destroyed Steeplechase Pier and Heinz Pier. Everything north of St. James Place to East Atlantic Boulevard was completely wiped out. Prior to the hurricane, the Boardwalk ran for seven miles. It extended from Atlantic City all the way to Longport. Following the hurricane’s destruction, however, the Boardwalk lost nearly half of its size, and since then has never reached the same length. Currently, it’s a little over four miles and is 60 feet wide and 12 feet above sea level—a clear demonstration of the Great Hurricane’s devastation. 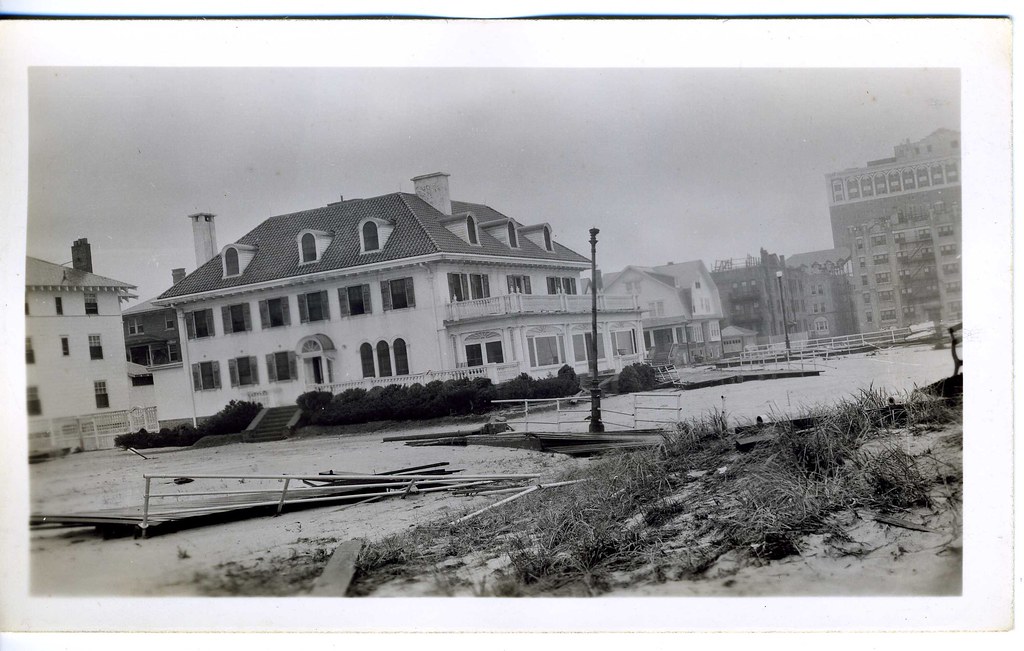 The 1950s reinstated America as the world’s strongest economic power. As such, Atlantic City returned as one of the hotspots for celebrity culture. The Boardwalk became linked to famous faces such as Marilyn Monroe, Jimmy Durante, Frank Sinatra, Dean Martin, Bing Crosby and the Beatles, and remained popular for at least a decade.

But by the early to mid-1960s, the Boardwalk experienced a decline in the number of visitors. Factors tended to include the exact reasons why the 1950s were prosperous. Jet travel became less expensive, which appealed to a growing middle class. Additionally, the automobile industry was booming. Because Atlantic City had relied on trains to get people to the city, the ease that automobiles could bring people into the city meant fewer people using the Camden-Atlantic rail line. This also meant that people would stay for days as opposed to weeks, dramatically impacting hotel figures.

All of these factors supported the conclusion that the Atlantic City Boardwalk could not survive on tourism alone. In the 1970s, the city decided to change its focus away from being primarily a tourist attraction, and instead, turned its gaze to an increasingly popular entertainment industry: gaming. Specifically, gambling.

Following a 1974 referendum, Atlantic City opened Resorts International on May 26, 1978. It was the city’s first casino, and many like it would soon populate the Boardwalk area. Nowadays, the Atlantic City Boardwalk is primarily known for its casinos, which attract millions of visitors trying their luck against the house. 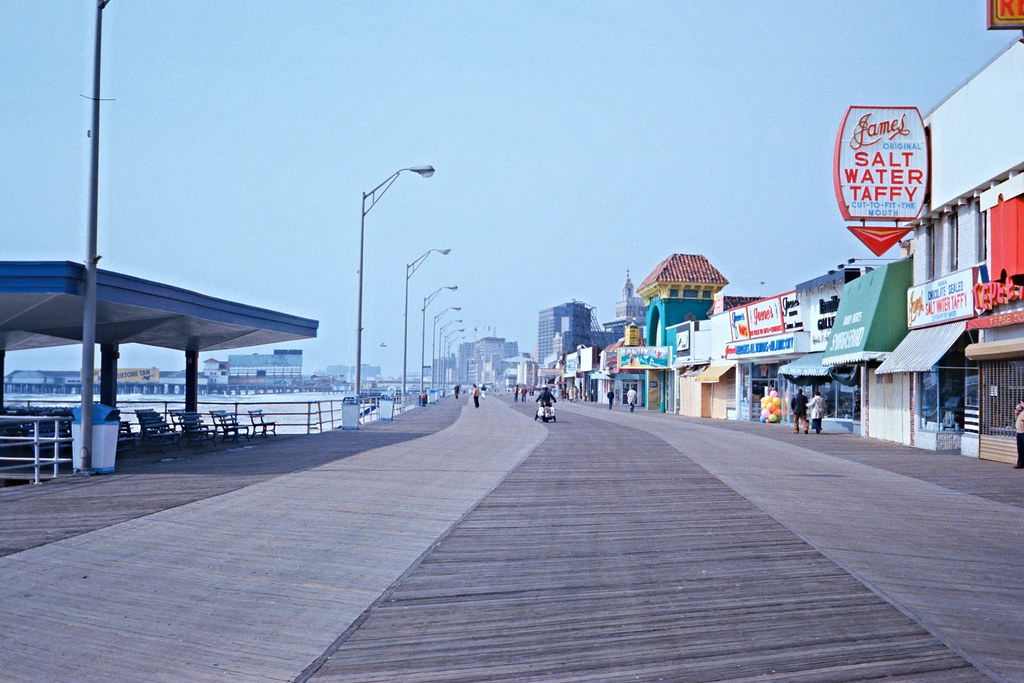 While popular, Atlantic City is still experiencing a notable decline. Its position next to the Atlantic Ocean means it is always going to be the victim of hurricanes and tropical storms, such as that of 2012’s Superstorm Sandy. Thankfully, though, that storm resorted in flooding and power outages but no widespread destruction of the Boardwalk itself.

Furthermore, its focus on gambling has led to it not being able to diversify its sources of income as well as other resorts across the country. The late 2000s recession also meant that many of the planned mega casinos never left the blueprint stage. Finally, the COVID-19 pandemic has affected the city’s already dwindling number of visitors, to the point where it’s unclear if it’ll ever reach the same heights as it did in its earliest years.

NJ’s Bruce Springsteen had a home cut during the pandemic, what can we expect as hair and beauty salons return to normal?

NJ Artist Makes Her Debut at The Morgan...

A Night of Magick at NJ’s Lunar...