The United States during the 1960s, as we all know, was primed for social revolution. The effects of the Second Red Scare, the growing escalation in Vietnam, and many other factors shattered any semblance of nationalistic pride and faith for many Americans. Individuals yearned to exercise their freedoms to protest and question authority. In 1965, Bob Dylan released two albums, “Bringing It All Back Home” and “Highway 61 Revisited.” In a way that only Bob Dylan could have done, these albums illustrated the growing dissension among youthful Americans and questioned the very structure of American politics. Students across the U.S., especially at Rutgers University, agreed with Dylan when he said: “You don’t need a weatherman to know which way the wind blows.”

In the 1950s, the Second Red Scare, an unsubstantiated communist witch hunt, permeated the campus of Rutgers University and called into question the integrity of three professors: Simon Helmlich, Moses Finley, and Abraham Glasser. The professors were under intense scrutiny for using their Fifth Amendment right to avoid questioning their ties to the communist party. While there was never any evidence suggesting that Heimlich, Finley, or Glasser had ever been affiliated with the communist party nor participated in any socialist recruitment efforts, they refused to appear before the Senate Internal Security subcommittee. This form of protest sealed their fate.  The subcommittee dismissed the professors from their academic positions on December 31, 1953.

This experience was not a unique one. During the 1940s and 1950s, McCarthyism went beyond a governmental scope and seeped into everyday American life. It disguised itself as a means of protecting the people and ironically, in many cases, stifled the freedoms of countless Americans. The pendulum, however, had already begun its inevitable backswing, and another movement gained momentum. Rutgers University elected Mason W. Gross as their 16th president, President Johnson declared war in Vietnam, and somewhere in between, Bob Dylan tuned his harmonica inside the Rutgers gymnasium. The counterculture of the 1960s had arrived. 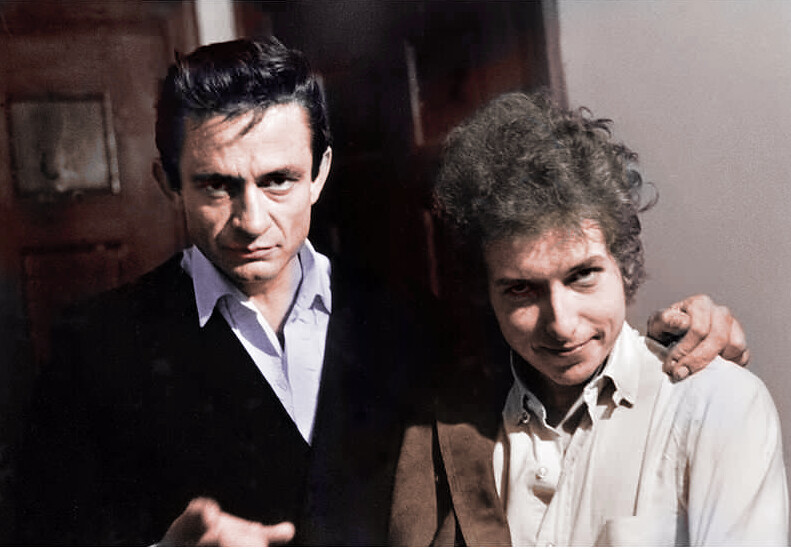 It is important to remember the forces that drove the counterculture movement. The remnants of the second Red Scare had left a bleeding wound that represented the growing rift between the government and its people. Enduring years of censorship and forced testimonies, younger generations emphasized free speech and political protest. These facts, coupled with the increased military presence in Vietnam, fueled the political and social unrest that rippled throughout college campuses, especially at Rutgers University.

Come Gather ‘Round People Wherever You Roam

By 1965, the counterculture had already crowned Bob Dylan, the king of the protest song. He was a voice for a generation trying to be heard, lending it now to a university that, only a decade before, was willing to dismantle the very foundations of personal freedoms to satiate the fear of the masses. That night on College Avenue, he leaned into his guitar and spoke of revolution.

In “God On Our Side,” Dylan holds a mirror to the country, which consistently uses God to justify its actions. He depicts, ironically, a sad truth for an audience of his peers. Its citizens read from the same history books and wore the same rose-colored glasses when reading its text. They all cheered for the country’s victories and cried for its defeats. This nationalistic facade destroyed millions of people and had nothing to do with God.

At the end of the night, Bob Dylan leaves the audience with “Seven Curses,” a ballad of a young girl who is forced to concede her body to a judge who holds her father’s life in his hands. When she wakes, the judge is gone, and the limb of the tree outside is bent; her father is dead. This simple song resonated with the movement because the government was actively deceiving the public over Vietnam and stripping its citizens of their autonomy.

In the spring of 1965, Rutgers University entered the national stage when it put its commitment to academic freedom and intellectual protest to the test. After Dylan blew into another town, Rutgers students and faculty sought to demonstrate their constitutional freedoms together in a “teach-in.” The purpose of a teach-in was to promote intellectual thought and offer a place for the students and faculty to debate and call into question the authenticity of its nation’s actions.

The first teach-in took place in a 500-seat lecture hall, with an estimated 1,300 attendees, illustrating the magnitude of unrest and political vigor held by members of Rutgers University. These teach-ins were so controversial that they garnered attention from the Vice President of the United States, Richard Nixon. They frequently appeared in the battle for New Jersey’s gubernatorial race. Although these“ teach-ins” did not always conjure up favorable results,  they did give Rutgers University the opportunity to right the wrongs of the 1950s.

On April 3, 1972, two decades after his dismissal, Rutgers University invited Moses Finley back to its campus to be the first guest speaker in an annual lectureship honoring retired president Mason W. Gross. The theme of his discussions: ancient and modern democracy. When asked why he chose to come back, “The Home News” quoted Finley saying, “Well, that was another generation of other people.” And just like that, Rutgers University struck a match, righted a wrong, and started anew.

How This NJ YMCA’s Disability Program Is Changing Lives

5 Type Of Job Possibilities You Find In Social Work

Wonderful article about Bob Dylan and Rutgers! Enjoyed reading an article about a time gone bye. Extremely informative and detailed. Thank you!