Maybe you’ve spent your summer sipping spiked seltzers. Or enjoying a beverage at one of the Garden State’s biergartens. Fall, however, is undoubtedly the season for hard cider. While it may be tempting to head upstate, NJ does its fair share of apple growing and brewing too. In fact, we have a handful of hard cider houses, each bringing their own craft beverages and unique experience to New Jersey.

I’ll give you the abbreviated version. The Garden State’s history with cider-making dates all the way back to Colonial times. Its popularity lasted from the 1600s to the early 1900s, approximately. In New Jersey, hard cider production was a principal industry and our state was once the nation’s leader.

When Prohibition happened, it was completely eradicated. And due to urbanization, orchards of the Harrison apple—the most famous apple for cider-making in the 19th century—began to vanish in Essex County. It wasn’t until 1976 that orchardist and fruit collector, Paul Gidez, came from Vermont in search of a Harrison. He discovered a single surviving tree in Livingston.

Where to Find Hard Cider in NJ Today

The revival of hard cider in New Jersey looks different for every producer. Some are relatively new to the game while others are generations old and family-operated. The common thread, however, is that they’re working to keep the state’s reputation alive as a renowned cider-maker.

Here’s where you can find hard cider in New Jersey from heritage varieties to New World and everything in between.

During the 18th and 19th centuries, there was an alcoholic drink favored by the likes of George Washington and Thomas Jefferson. It was called Newark cider and drinkers of the beverage even compared it to a black-market Champagne.

While it may be hard to imagine, the Newark area at that time was filled with cider mills and apple orchards. Of course, urbanization and Prohibition rendered Newark-style cider-making a lost art. That is until one Montclair man decided to revive it. ​​Ironbound was founded by Charles Rosen, whose initial foray into cider production started with first founding New Ark Farms and Jersey Cider Works. With the help of local winemaker Cameron Stark, Ironbound Hard Cider became the first product from Jersey Cider Works. And an ode to Newark’s role during the early days of hard cider-making. Today, Ironbound operates out of a 108-acre regenerative farm in Asbury where visitors can visit their cider garden or marketplace.

Traditionally, Newark cider was centered around the aforementioned Harrison apple. Ironbound’s recipe includes the Harrison, in addition to other heritage cider apples sourced throughout the tri-state. By incorporating these older apple varieties, Ironbound hopes to keep New Jersey’s cider heritage alive while capturing the true essence of the Garden State. Each of Ironbound’s cider offerings starts with 100 percent local, fresh-pressed apples. They have three core ciders that you can easily find throughout New Jersey. (The original is a great go-to.) They’re also taking liberties with their specialty ciders. You’ll find combinations such as Gooseberry Ginger or Black Tea and Lemon. I’ve yet to meet one I haven’t liked.

John and Denise Coates, the husband-and-wife duo behind Burnt Mills, are dedicated to revitalizing the Garden State’s relationship with hard cider. The name draws from its location in Bedminster Township, a historic Revolutionary War site.

Now knowing how influential the drink was in colonial America, surely you can understand why Burnt Mills chose to pay homage to New Jersey’s long-standing history of cider-making.

Although they only opened in the summer of 2020, Burnt Mills’ commitment to local cider production is already well-known. (They’re also the first cider house in Somerset County.) In the tasting room, you’ll find a dozen or so tree-to-glass cider varieties. These include their core lineup in addition to rotating seasonal and experimental offerings. 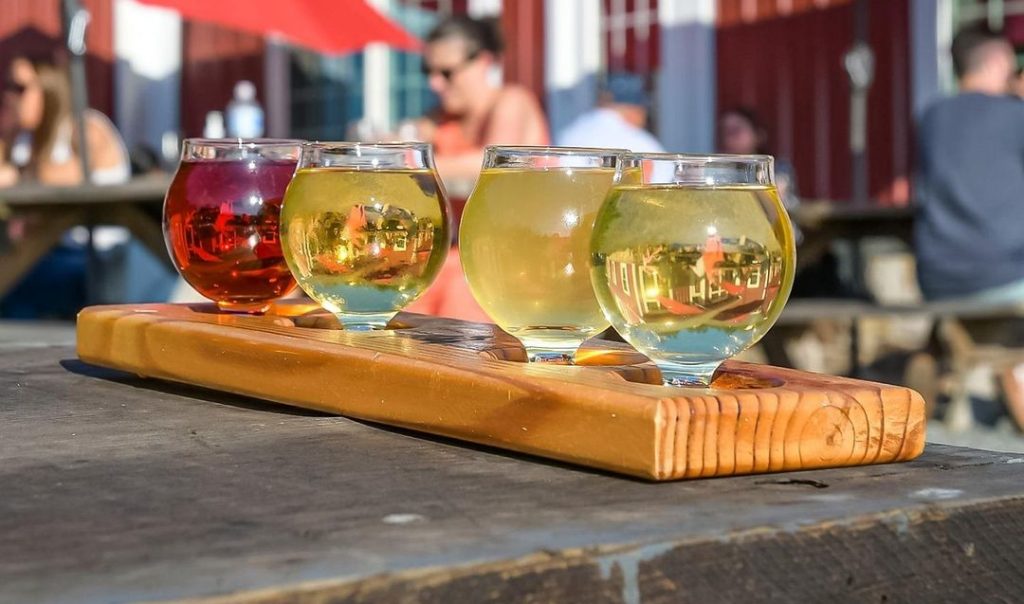 Raritan Headwaters features cucumber and mint and is named for the Coates’ friends at the Raritan Headwaters Association. Jersey Blue with fresh, NJ blueberries and the Immune Booster with ginger, turmeric and chamomile are a few of the more unique offerings at Burnt Mills.

On-site, John has planted approximately four acres of heirloom apple trees which will be used exclusively for cider once they’ve produced fruit.

What if I told you that a health scare was the basis for how Armageddon Brewing began? When founding member Christian Annese was misdiagnosed as Celiac, he was forced to explore alternatives to beer.

That path led him to hard cider and mead, both of which are naturally gluten-free. As self-proclaimed avid home brewers, it only made sense that Annese and his buddies start making their own from scratch in 2014. Turns out, Annese was in the clear healthwise, but starting a full-blown cidery was much more arduous than expected. It took over three years for Armageddon to get the proper licensing from the state to produce and distribute cider and mead. (Traditionally, cider makers would operate under a winery license.) A successful Kickstarter campaign assisted in bringing this passion project to life. It wasn’t until January 2020 that Armageddon finally opened its doors for the first time in Somerdale.

In terms of what they got brewing, they’ve got four “flagship” ciders that are available year-round. Exile, semi-dry and the most traditional tasting. Resurrection, a honey-based cider. Ida’s Heart, made with raspberries and apples. And Desire, made with blueberries.

There’s also a rotating selection of seasonals that feature organic, locally sourced ingredients. A range of semi-dry and European styles to sweet and juicy offerings. Armageddon has what they call a “pilot orchard” in Pennsylvania which includes a variety of apple trees, pear trees and bee hives. The purpose here is purely experimental. In terms of how they’re sourcing ingredients for their everyday brewing, they make their way to nearby tri-state area apple farms.

When pick-your-own season rolls around, New Jerseyans flock to Melick’s in Oldwick. They’re known as the largest apple grower in the state for nearly 300 years with over 20,000 trees. Along with being a favorite for fresh fruits and vegetables, locals also visit for their Christmas trees and pumpkin patches. This centuries-old farm, however, is not opposed to innovation. More recently, Melick’s decided to introduce a line of hard ciders.

The venture came about when tenth-generation farmer, John Melick, teamed up with cider maker Scott Wyant. Wyant, who’s CIA-certified, took a liking to cider producing while living in Switzerland. Particularly, the dry style of cider that was widely consumed. When Wyant returned to the States, a friend connected him with Melick. In 2016, Melick’s put out their first batch of hard cider in New Jersey. The apples used were what they refer to as “seconds.” This includes apples that have been bruised or damaged. At the same time, they were also planting trees of the traditional hard cider variety for eventual production. Today, apples from those trees are handpicked, pressed and fermented in small batches to make almost 10 different types of cider.

You can find the merging of New World and heirloom apples in their hard cider recipe. Purists should try the Oldwick 1728 Traditional or the Semi-Dry Traditional. Those who like to venture out should give the Lemon Shandy a go or George’s Tart Cherry. The Tewks “Perry” is another favorite and an actual ode to the Garden State from its name to the apple-pear blend.

Just a stone’s throw from Pier Village is Beach Bee Meadery. Despite the name, they have some exceptional hard cider offerings. Although, if you pay them a visit, definitely give their meads a try. Beach Bee is a family-owned business that first opened its doors to the Jersey Shore community back in 2019. This was after a three-year renovation of a historic Long Branch building from the 1900s. Among their current releases are fun and funky infusions. Think mango habanero, blueberry pomegranate, white tea, passionfruit, guava lime that’s been aged in rum barrels. The hard ciders from Beach Bee are anything but traditional, but we love a new take on a timeless classic.

Been to any of these New Jersey hard cider houses? Let us know in the comments!

NJ Town Named Most Beautiful in America by CN Traveler

Tools That Every Amazon Seller Should Use