The Jersey Shore is home to many things––beachgoers, television series, boardwalks. But it’s also home to an apex predator that most locals would prefer to avoid. Shark species have existed along the shore for decades, including makos, bull sharks, threshers, and even the infamous great white shark. During certain times of the year, the Shore makes a perfect nursery for young sharks, letting them flourish. So, are there sharks in New Jersey? And if so, who has encountered them?

Sharks thrive in all kinds of ecosystems. Though most commonly found in the southeast, they can endure a wide range of temperatures. Some, like the bull shark, can even survive in both freshwater and saltwater. Oceanographers and marine biologists have long studied the remarkable creature, whose infamous reputation is revisited each summer. At the Jersey Shore, there are most certainly sharks, with sightings increasing in frequency. Despite the colder waters, a variety of them has flourished at the Shore, establishing nurseries throughout the Atlantic.

A shark nursery is a designated area in the ocean where young sharks, otherwise known as juveniles or pups, grow until they reach maturity. These areas are typically calm, letting them learn predatory and survival behaviors. Nurseries are reused seasonally—mature sharks will give birth in the early spring or summer, then migrate to waters with larger prey and competition. Researchers can identify these places based on juvenile shark populations, the prevalence of shallow or calm waters, and the absence of mature sharks.

The Jersey Shore has several of these nurseries. Scientists from the New York Aquarium located a sand tiger shark nursery in the shallow waters of Long Island’s south shore in 2016. Later, in 2018, a great white shark nursery was discovered in the New York-New Jersey Bright. New Jersey estuaries—shallow waters where the ocean meets a river—also house sandbar and smooth dogfish sharks. An estuary. Image by Nathan Anderson

Because of these Jersey Shore ecosystems, many species are common, particularly sand tiger sharks. Even the occasional whale shark has been spotted swimming near the Shore. As summer continues, the number of shark sightings have increased.

On Monday, July 12, 2021, a 1,400-pound great white shark was spotted and tagged three miles off the coast of Cape May. Stretching 13 feet in length, the great white was released back into the ocean. He was named Breton after the neighborhood he was discovered in.

Another, smaller shark named Freya was located in late June 2021 off the coast of Long Island. Tagged and released in a similar manner, the female white shark was 11 feet long and weighed nearly 900 pounds. That’s the average size for a great white, the largest growing to 20 feet in length. 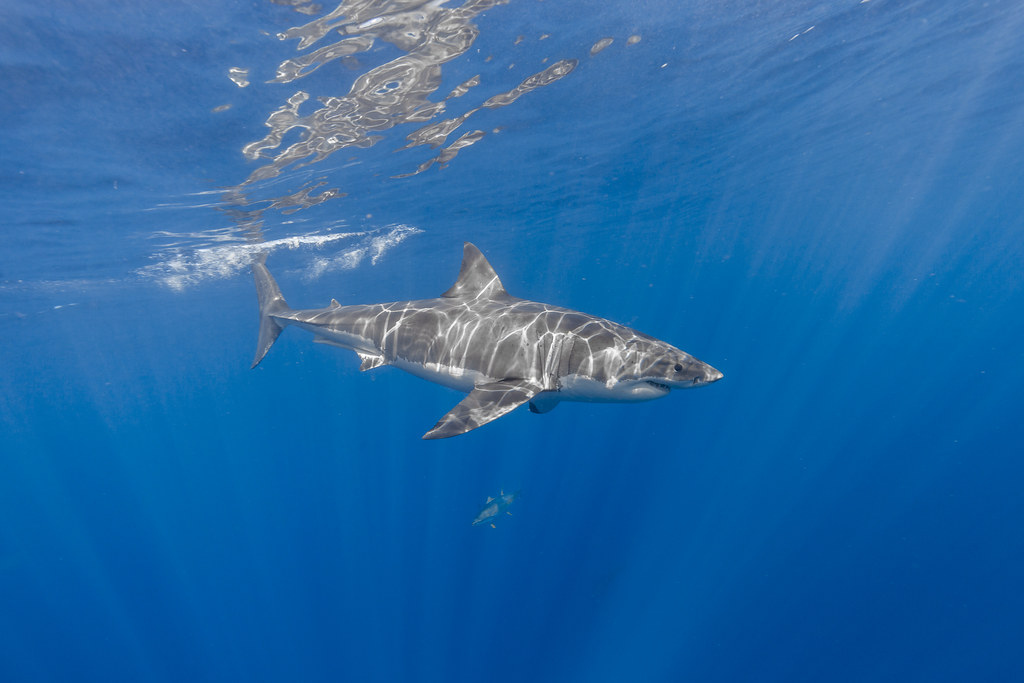 However, most sightings are of juvenile white and tiger sand sharks. Usually around four feet in length, the pups are far from apex predators. Typically hiding from threats, juvenile sharks are like any young, learning creature. In fact, most sharks are harmless to humans. Researchers claim that you’re more likely to be bitten by another human on a subway than by a shark in the ocean.

Interestingly enough, though, there was an anomaly in 1916 where a series of shark attacks occurred at the Jersey Shore.

If you’ve ever seen the movie “Jaws,” you may have wondered where the inspiration for such a chilling tale came from. In fact, the film was based on a book that referenced the Jersey Shore shark attacks of 1916. Between July 1 and 12, 1916, five attacks killed four people and injured one.

The attacks became the subject of popular culture, featured in documentaries from History Channel, National Geographic, and Discovery Channel. Eventually, sharks became synonymous with danger, much to the dismay of researchers. It was the first time that people regarded sharks as killers, not just marine creatures. After the five attacks, the Jersey Shore became the focus of national reaction. A wave of panic led people to hunt the sharks in an attempt to eradicate them. Fishermen tossed sticks of dynamite into the waters while plans arose for the Coast Guard to initiate warfare against the fish. People closed parks and resorts and largely abandoned the ocean. President Woodrow Wilson even provided federal aid to drive the sharks away.

Overall, there was a great deal of uncertainty. Before this time, people didn’t know much about shark abilities and behaviors. In a good way, the entire movement motivated scientists to reconsider sharks, leading to great new findings about their biology and tendencies.

There’s still a lot of speculation about these attacks. This includes what kind of shark caused the mayhem in 1916. On July 12, a marine animal attacked three people consecutively at Matawan Creek’s Wyckoff Dock, leading researchers to believe the culprit was a bull or great white shark. Before the attacks, one fisherman reported seeing an eight-foot shark, further validating suspicions. However, some skeptics attribute the attacks to sea turtles. Either way, it was a time of disarray. Between heat waves and the polio epidemic, many more people flocked to the beaches. It was also in the midst of World War I. With the various factors in mind, researchers were unable to provide conclusive explanations, only later stating it was unlikely to happen again.

Should We Fear Sharks?

Today, as a result of human activities, most sharks are vulnerable or endangered. Fishermen and scalpers kill exponentially more sharks each year than vice versa, causing challenges for the animal in terms of reproduction and survival. This is especially concerning given how sharks benefit their ecosystems. They maintain the food web, keep the carbon cycle in motion, protect coral reefs, and even harbor cures to certain diseases. Their value far outweighs their minimal danger. As further research is conducted on these species, including documentaries like “Shark Week,” the more apparent their harmlessness to humans becomes.

Whenever you swim at the Jersey Shore this summer, remember––you’re a guest in someone’s home. Sharks and all other magnificent marine life preserve and live in the ocean, as they have for thousands of years. Despite the predator’s reputation, they’re incredible creatures.

Do you have shark stories from the Jersey Shore? Tell us in the comments!

Digestive Enzymes vs. Probiotics: What You Need to Know