What You Need to Know About SopranosCon 2021

If you like television, if you’re from New Jersey, and have a pulse, then chances are you like the hit HBO series “The Sopranos.” The modern streaming age has reincarnated the series, just like many old TV shows or films. The fandom of young audiences is just like it was in the original days. At the same time, the older fans celebrate in having newfound justification to rant about their favorite show from 20 years ago. But what is there to do with all of this “Sopranos” buzz and excitement? We’ve rewatched it over and over again. We’ve followed all of the meme accounts. And nobody wants to hear us argue about the “Pine Barrens” episode being television mastery anymore. If only there were something to channel this obsession; oh, wait a minute, there is! On July 24 and 25, fans of the show can rejoice and geek out together at the 2nd SopranosCon event at Harrah’s Resort in Atlantic City.

Don’t overthink it. SopranosCon is exactly what you’d expect; it’s “Sopranos meets Comic-Con.” Just like any convention of the sort, there will be a lot going on there. The producers paint the scene as a “street-festival themed fan experience” with vendors, picture and autograph opportunities, memorabilia, food, music, art, performances, Q&A panels, and more. But for most fans, the real draw of this event is the attending cast members.

Unfortunately, not all top cast members will be there, such as Michael Imperioli (Christopher) or Edie Falco (Carmela). But don’t fret; they expect stars like Lorraine Bracco (Dr. Melfi), Drea de Matteo (Adriana) and Dominic Chianese (Uncle Junior) to be in attendance, as well as just about everyone else–and I mean everyone. Even the guy that played Tony Soprano’s football coach (Charley Scalies) in one of his dreams is going to be there. They also expect more cast members to commit in the weeks to come, so stay tuned to their Instagram page for more announcements. 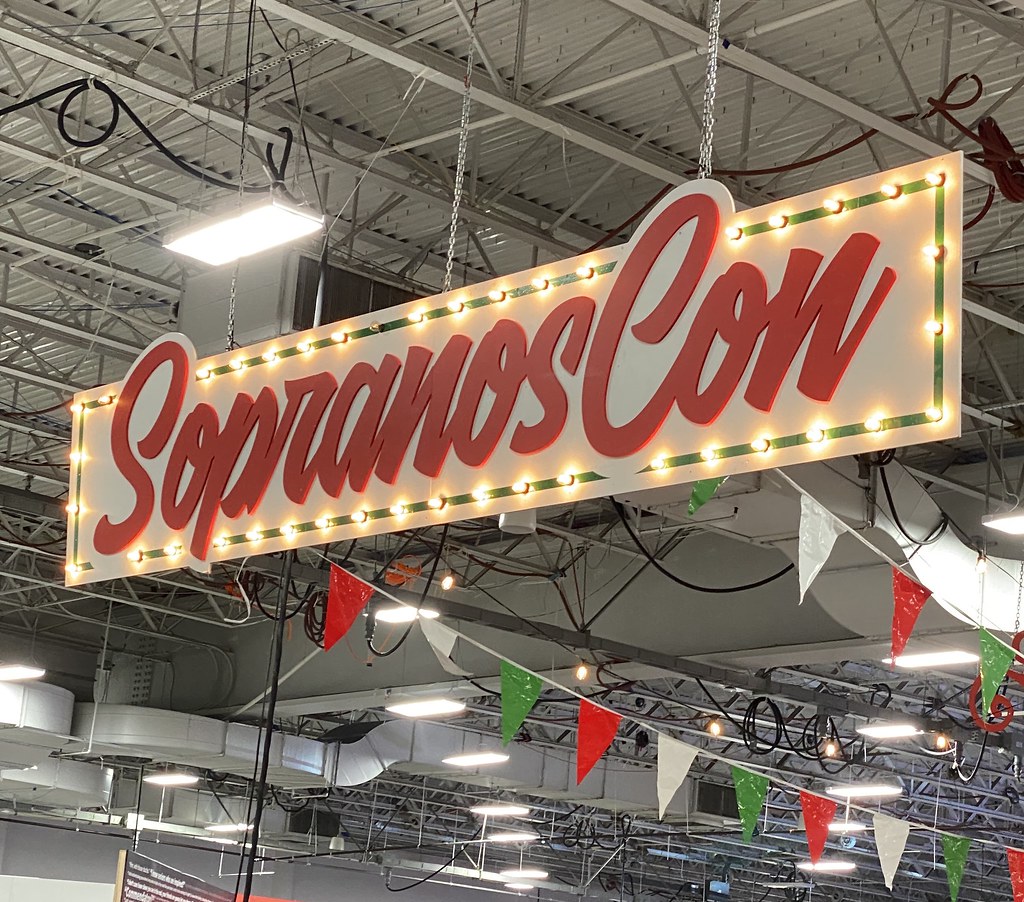 The 2021 event will be the second rendition of SopranosCon, which is remarkable considering what the event organizers have been able to pull together. Even at the first event in 2019, over 10,000 people showed up throughout the weekend in the Meadowlands. Unfortunately, the 2020 event was canceled due to COVID-19. But this year, they’ve brought it to Atlantic City and have added some additional features to the weekend.

What’s interesting about SopranosCon 2021 is that there will be “two cons in one.” SopranosCon will be held alongside a new event dubbed “MobMovieCon.” It’s hard to tell how these two “cons” will mesh together, but they plan on running them simultaneously, and they’re part of the same ticket package. You can expect MobMovieCon to serve as the natural extension to SopranosCon, as it’ll bring more legendary gangster film actors such as Paul Sorvino, Michael Madsen, and more. Also keep an eye out for the MobMovieCon Instagram handle for more updates, as they seem to use this platform for announcements.

It should also be mentioned that there’s a separate event taking place in the same location, on Friday, July 23, which will be a reunion for the 1996 movie “Gotti.” This event seems to be primarily a live panel session and reunion with actors from the movie. However, the ticketing for this event is separate from SopranosCon and MobMovieCon.

Now that we understand what SopranosCon weekend will look like, let’s cover some important details worth knowing.

The creators of this event are a group of guys that dub themselves 3Fams Production. However, it seems the company and producing arm behind 3Fams is what’s known as VirtualCons. Essentially, VirtualCons is an app they’ve created that offers users both in-person and virtual experiences, events, and connections.

This group sprung out of thin air a few years back. It started with an idea for a “Sopranos” event and from there seemed to take off. Right away, one of the co-founders got Federico Castelluccio (Furio from “The Sopranos”) involved, and he began using his connections to take it to the next level. His involvement was likely a critical force in getting star cast members to participate from the beginning.

The organizers of this event couldn’t be more fitting. They seem like a group of New York/New Jersey hustlers, but not in a bad sense. If you live in these areas, you likely know more than a few people like this. Honestly, could SopranosCon be put on by anyone else?

Including the “Gotti” reunion event, the full timeframe for the festivities is Friday, July 23 through Sunday, July 25. Harrah’s Resort has all the trappings of a resort/casino and is part of the reputable Caesars Entertainment management group. You can learn more about the spot and all the amenities that come with it by looking at its website.

As far as ticket options go, there are quite a few. One can purchase a package from $50 to $5,000–that’s right, $5,000. For general, daily admittance the tickets are $50 per day. Just beware that those tickets don’t include guaranteed autographs and photo-ops; those are paid for separately. Either way, whatever kind of package and experiences you’re looking for, you should be able to find them in their available options.

The schedule for the weekend still seems to be slightly up in the air, as they haven’t announced one on the SopranosCon website yet. However, a schedule posted on the MobMovieCon site is likely similar to what SopranosCon will be like. You can view that plan here.

What to Expect at This Year’s SopranosCon

All of this might sound appealing to you, but maybe you’re still on the fence. You know the details, what it is, what’s coming this year, and all of that surface-level information, but what will the overall experience really be like?

Even if you didn’t watch “The Sopranos,” this event would be worth attending if not solely just to people-watch. Whether we admit it or not, we all love a little people-watching from time to time. And just imagine this crowd. The fans here will probably even make “The Sopranos” itself not look Jersey enough. I’d expect a mix of NJ-to-core people, geeked-out fans who typically attend “cons” of this nature, and just regular fans who had no idea what they were getting into. About half the crowd at the first event was dressed up as characters from “The Sopranos,” though one has to wonder if they were really “dressing up” at all. Either way, I’d expect a phenomenal display of fashion. My guess is tracksuits, Tommy Bahama shirts, bathrobes, and tank tops will all be fervently competing for the most common outfit award at SopranosCon 2021.

In all sincerity, this event appears to be a win-win all around. The producers are capitalizing on a prominent and largely untouched niche market. Many of these actors are only known for their mafia roles. And now get to be at a place where they’re worshiped and valued for just that. Plus, the fans who love to get a little nerdy over their favorite show and fawn over the castmates get their event of a lifetime. Everyone wins, and nothing is wrong with that.

And just in case you’re not quite sure what to wear, here’s a good cartoon depiction of some of the kinds of outfits you can expect at SopranosCon 2021:

As far as what to expect from an overall event experience, I’d say your best bet is to be patient. If you’re a frequent event goer, either for pleasure or work, then this might be a little different than what you’re used to. The event and its producers are still new, so some minor kinks might still need to be worked out. They want to go big or go home, and with that might come some small mishaps. There might be some long lines, ambiguous situations, and logistical hiccups, but nothing that should ruin the event or your experience.

The real question for the 2021 version is the new Gotti reunion event and MobMovieCon. I wouldn’t expect anything, good or bad. These events are on their first editions, and that means they’re wildcards. But it also means they have a lot of room to go up. The one thing you can expect from the MobMovieCon is a MobMovie Awards ceremony. It’s hard to tell what exactly will happen here and what the awards will be, but we do know the legendary Ice-T is hosting it, so that’s cool, right?

If you’d like some first-hand accounts from the 2019 event, there are a couple of sources worth giving a look at. I was a huge fan of this piece from Julia Gray at the Washington Post. In my opinion, she perfectly captured the humorous side of the event while scenically portraying the atmosphere. However, if you want more details than commentary, then this piece by Justin Sayles at The Ringer is for you. It’s long and incredibly detailed, but it should answer a lot of event questions.

I’d expect the unexpected at SopranosCon 2021. With an open mind and some patience, I think anyone would have a good time at this event, fan or not. “The Sopranos” fandom is growing like never before and perhaps is more significant than ever. And it looks like this fandom and SopranosCon is about to get an extra boost, as just recently, HBO Max released the trailer to the highly anticipated “Many Saints of Newark.” Which is, of course, the prequel movie to “The Sopranos,” take a look:

5 Jersey Shore Boutiques to Check Out