Not Your Average Ice Cream: Windy Brow Farms in NJ

It is not often that you find yourself driving an hour away into the middle of nowhere just to get some ice cream, but that is exactly what I found myself doing when I came across this photogenic scoop-shop. Tucked in the winding roads of  Fredon Township, NJ lies a farm that is doing much more than just growing produce. 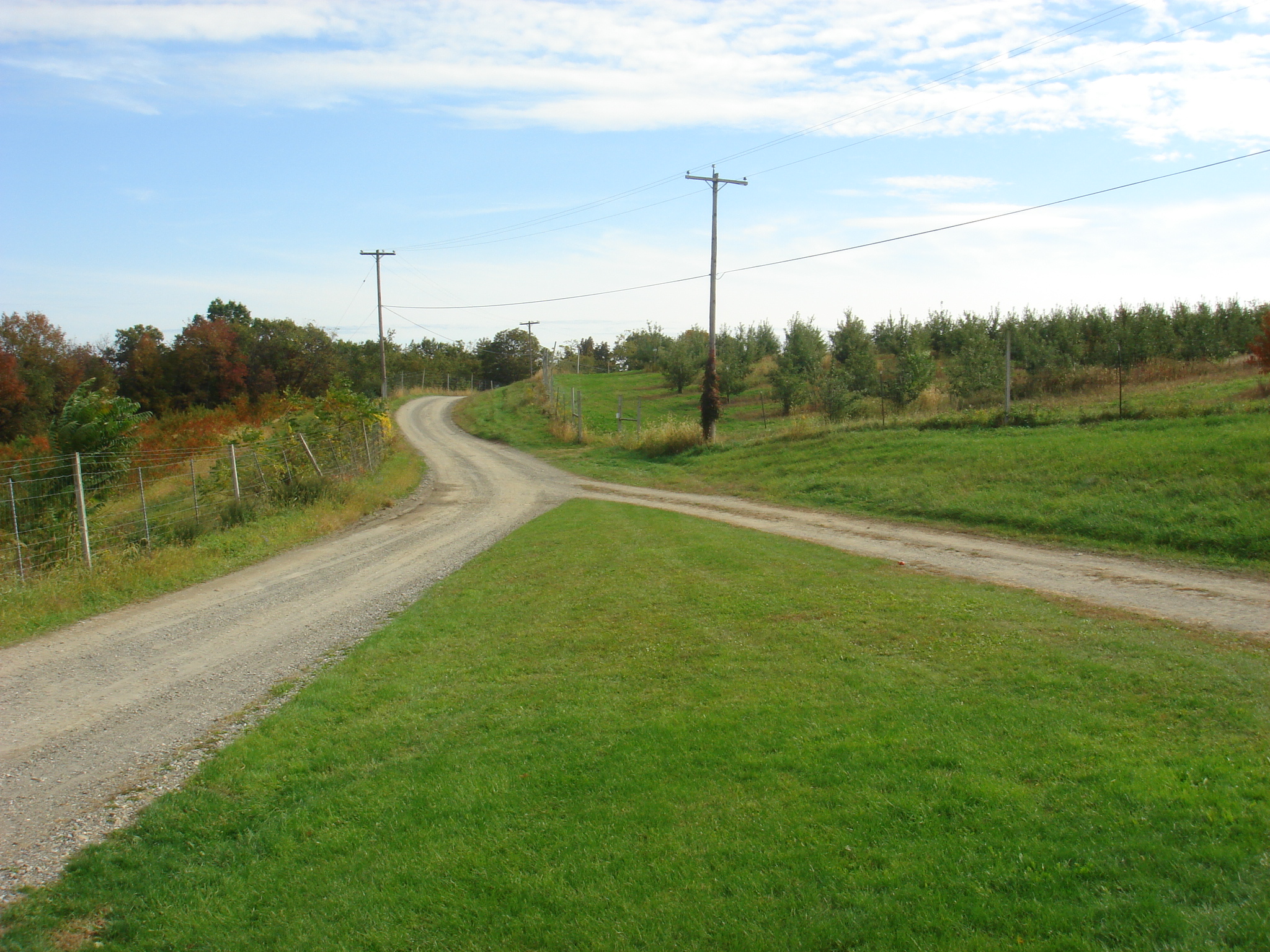 Windy Brow Farms was originally operated in the late 1800s as a dairy farm by the Inslee family. By the 1920s, the first fruit trees of the farm were planted. When a tragic barn fire destroyed the dairy production in the 1940s, the Inslees turned their full focus to fruit— becoming one of the original fruit retailers in Sussex County. For 60 years, the Inslee family continued to sell fruit until handing the farm off to new ownership.

The space bounced around between owners until 2000, when Jim and Linda Hunt bought Windy Brow Farms. Throughout the year, the Hunts grow 45 varieties of apples and 15 varieties of stone fruit. As far as the original apple trees planted in 1920? Some are still bearing fruit to this day. The idea of picking and eating fruit that is hanging from a 100-year-old tree is almost unthinkable, but dedication and proper growing and harvesting practices allows us to do just that. Today, it is as easy as ever to pick your own fruit at Windy Brow; the fields open in early September for PYO.

Windy Brow operated for years as a produce farm and retailer, but it was Jim and Linda’s son, Jake, that took the farm to never-before-seen levels of operation. While studying at the University of Delaware, Jake Hunt found a knack for ice cream-making when running an on-campus creamery. Though he didn’t originally have returning to his parent’s farm in the cards, Jake saw Windy Brow as the perfect outlet for his dairy-rich vision. So, in 2013, the Hunts began to reimagine Windy Brow Farms into what we know it as today: The most Instagram-worthy farm in the state.

Not Your Average Ice Cream

As far as ice cream goes, Windy Brow is putting out some of the most inventive and peculiar flavors in the state. A scoop of maple scented ice cream studded with crispy squares of Taylor Ham, chunks of french toast and swirls of maple caramel for example. The Taylor Ham & French Toast was one of the original flavors that boosted Windy Brow to virality when the playful scoop began showing up on Instagram feeds a few years back. And though it is kind of a gimmick, I’d be lying if I said it wasn’t damn good. Defining homogeneity of rich maple flavor is perfectly complemented by the salty, cured meat. Putting cries of “Taylor Ham versus Pork Roll” aside, it is one of those flavors that every New Jerseyan should try at least once. It is Hunt’s perfect homage to the Garden State. A whipped ricotta ice cream is brimming with local honey, caramelized walnuts and fig jam. Walnuts are one of those products that I find to be perfect for ice cream flavors— albeit, I am slightly allergic. Still, I could never pass up a flavor so enticing and one bite couldn’t hurt. The base ice cream is slightly sweet from the natural lactic sugars in the ricotta, and the honey is truly special: Cloying swirls of it offer the terroir of the surrounding area as seasoning. Walnuts— my favorite enemy— and fig jam play off one another with the respective acidity and earthiness rounding each other out. My one bite turned into several and I had never been happier to sport an itchy mouth.

Another nut and honey flavored ice cream was calling my name next. Burnt honey ice cream is dotted with salty, roasted pistachios and swirls of honey caramel. Although sounding extremely similar to the former, the flavors could not have been more abstract in their own rights. An invited bitterness from the burnt honey is the perfect venue to house addictingly good pistachios. I am an admitted fan of artificial pistachio flavor— its bright green hues and floral notes. However, this completely natural (and local) pistachio ice cream might be what I prefer going forward.

An ice cream made with Madagascar vanilla and swirls of vanilla bean is Windy Brow’s top seller. Simply put, it’s vanilla ice cream, but for Jake it is one of the most important flavors on the menu. “Even when the Taylor Ham flavor was going viral, vanilla was always our top seller,” Hunt told me. “Vanilla is a must.” He was right, you need a classic vanilla flavor on the menu, so why not make it as good as it could possibly be? Same goes for chocolate, and Windy Brow puts out a serious contender. A 64 percent dark chocolate ice cream is fortified with dutch cocoa powder. It is subtly sweet and rich proving, once again, that Windy Brow can do the classics just as well as they do their ambitious flavors. For chocolate lovers, it is a no-brainer.

For vegans and the lactose intolerant alike, Windy Brow keeps a constantly rotating roster of dairy-free ice cream flavors. Lavender agave, dark chocolate sea salt and grapefruit rose are just some examples of vegan flavors you might find at the scoop-shop. Many ice cream lovers might scoff at the idea of putting so much focus into a dairy-free section of the menu, but for masters of their craft, like Jake, it is about more than that. It makes their menu more inclusive, and it also creates a challenge for Hunt when conceptualizing flavors. It is important to recognize that the dairy-free options at Windy Brow Farms aren’t just good for being vegan, but they are great flavors that just so happen to be vegan. Many of the flavors at the Windy Brow scoop window are seasonal, and the 4000 apple trees and 3000 peach trees on the 130-acre farm assure that seasonal fruit will always make an appearance when available.

Ice cream was not the only addition Jake brought when returning to work on his family’s farm. The ice cream window also serves as a coffee and drink shop. Fruit lemonades, lattes and cold brews topped with homemade foams are just some of the options when you need a quick pick-me-up. My personal favorite being what Jake calls the OG Summer Shandy— a half-and-half blend of bold cold brew and tart peach lemonade. Cold brewing coffee often brings out the fruity flavors of a coffee bean, and when combined with peaches grown a couple hundred feet behind you, it makes for the perfect summer beverage. Of course, because Windy Brow is seemingly in a constant evolutionary state, Hunt brought an extensive baking program into the business model a few years back. Naturally leavened loaves and breads are made with local grains from River Valley Grain Cooperative— a collaborative of grain farmers using regenerative growth practices. Local grains are often pricey, but it is a price worth paying to make bread that is infused with the terroir of your surrounding land. French country, seven grain, seeded buckwheat, sourdough and cranberry walnut are just some of the breads you might find when shopping around at Windy Brow Farms. It isn’t just bread that Hunt is bringing to the table. House made pastries, many of which utilize the fruits of the farm, are in abundance in the shop. Pies, apple cider donuts and laminated doughs are available daily.

Hunt even does pizza nights at the farm, using a combination of fresh yeast and levain to make a profoundly light dough. Baked in the same bread oven as their loaves, the pizza is airy and kissed by a slight char. Pizza nights fill up fast, so keep an eye on their Instagram to pre-order your pie for the next one.

Above all, Windy Brow Farms and the Hunts empower their surrounding community with everything they do. Their shop is filled with specialty items, local businesses and produce. Their ice cream, coffees and breads center around the use of regional ingredients. It is more crucial now than ever to eat local as much as possible— bolstering your community and your environment. Every single ingredient and technique is carefully thought through by Jake himself; keeping sustainability and a local focus at the forefront of his business model.

Windy Brow Farms Is Ever Changing

Windy Brow Farms seems to always be growing. Every time I think they are at their apex, the Hunts add something new to boost the farm forward. This remarkability is inspiring, and the Windy Brow model has proven to work. Jake Hunt has taken something he loves to do and created a path for people to do just that with ease. Instagram-worthy ice cream and expertly made pastries are what reeled me in, but the sense of community and passion are what keeps the farm fresh on my mind.

Windy Brow Farms is many things: It is an ice cream shop, a bakery, a pizzeria, a pick-your-own farm, a field of flowers, an orchard and so much more. It does not fit into one specific box and it isn’t meant to. Jake Hunt and his family work tirelessly to bring community and farm-life together— one scoop, loaf or apple at a time.