In the summer of 2019, I found myself in a lesser-known region of the Tuscan countryside. I spent a week in a medieval village called Barga. The town’s ancient charm has remained virtually unchanged for centuries. Sure, there are cars and Vespas weaving through the narrow, web-like streets and oddly shaped buildings—but it’s the town’s markets I’ll remember most. There was an artisan or shop for everything—cheese, leather, wine, butchery. This is what we’re missing at home. This is real life, I thought.

But then I thought harder. And it turns out, that wasn’t entirely true. For all our development and infrastructure, you just need to know where to look. Our local communities may not gather for sales in the square every day, but they’re still filled with talented New Jersey artisans. You know, the people who make really cool shit.

There’s something undeniably nostalgic about a 21st-century leatherworker or independent watchmaker. Their crafts are reminiscent of a time when those local artisans were all we had. Sure, hitting that Amazon app on your phone is time-efficient. But I don’t want to live in a world where every bottle of gin is one of 100 million. Or where every leather wallet is identical to the other thousands behind it on the assembly line. Last year, I was fortunate enough to attend a cocktail mixing event at BillyKirk’s temporary studio in downtown Jersey City. I walked away with perhaps the coolest custom passport holder and bar bag I’ve personally ever seen (I even got to stitch the holder myself). Since then, I’ve been obsessed with this local artisan.

BillyKirk is the brainchild of Chris and Kirk Bray. The two brothers founded their brand in 1999 to counteract the trends of mass production (and subsequent inferior quality). Each item they produce can be embossed or customized to the individual. When it comes to uniquely-designed leather gifts with character, BillyKirk should be your first inclination. 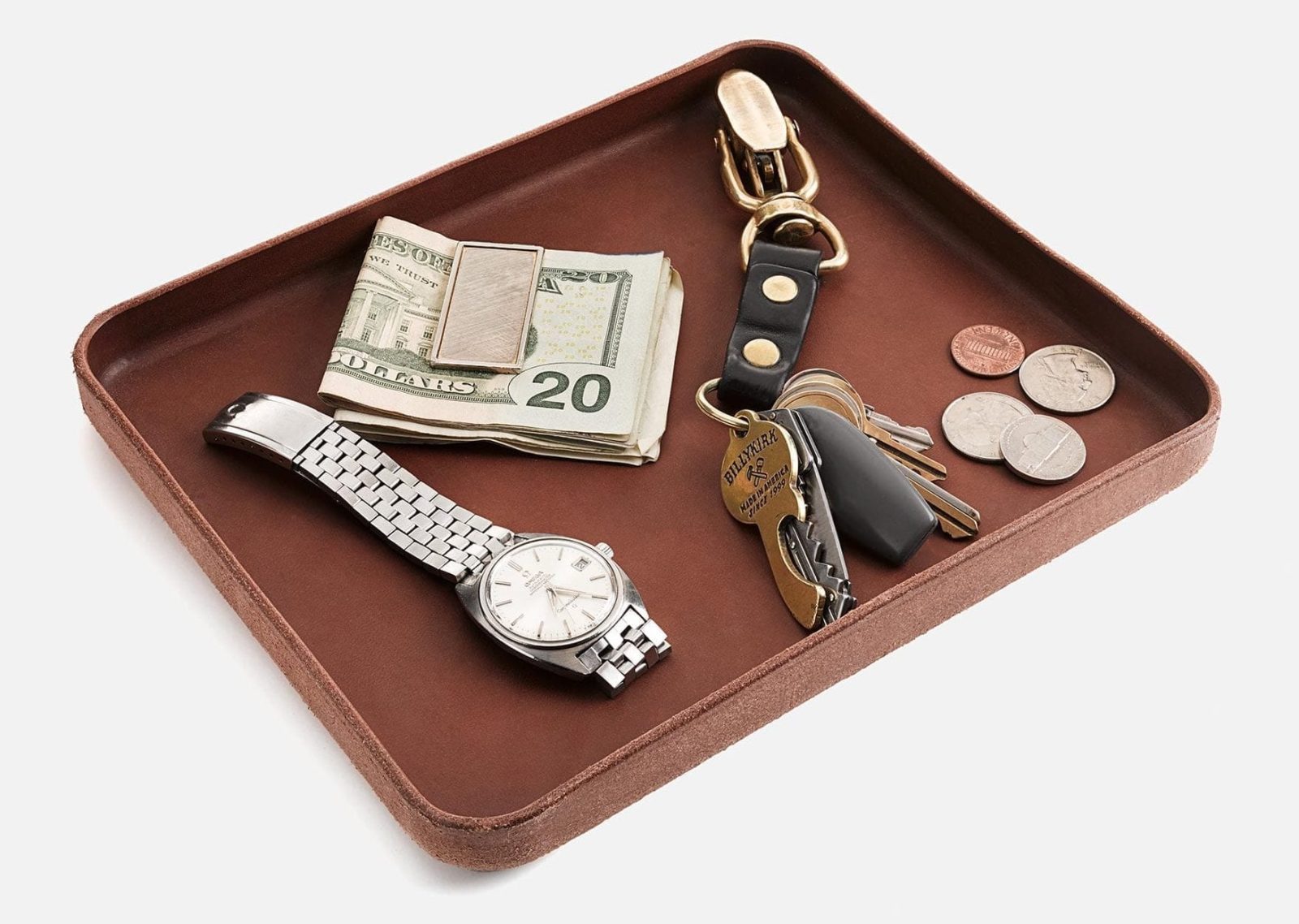 “Made with full-grain vegetable-tanned leather, the Large Valet Tray is the biggest of our molded leather trays. Whether holding keys, office supplies or used as a rolling tray, the valet tray’s patina becomes a reflection of its owner.” – BillyKirk “Made with high quality 20 oz waxed canvas and full-grain vegetable-tanned leather, every Carryall is designed to age with grace. Whether you’re just buying one, or several sizes from our Carryall line, they’re sure to be lasting companions on all of your future adventures. Happy trails!” – BillyKirk


***Use Code: BILLYKIRK_DIGEST15 For 15% off all non-limited edition products*** “Billykirk’s take on this classic jean belt with four rivet design and roller-bar buckle. Solid brass or nickel-plated brass hardware ensure that this belt will last you a lifetime.” – BillyKirk During an editor’s roundtable, a publisher from Miami asked me what was hot in the New Jersey spirits scene. Before the words “gin is in” left my lips, I was met with some smug remarks. But, kids, gin is most definitely in.

Jersey City-based small-batch craft distillery, Corgi Spirits opened its doors in 2017 right off Pacific Ave. Founded by Bob Hagemann, the close-knit company operates like a fun-loving family—as the distillery’s name suggests. Before they were able to open their outdoor patio during the early days of the pandemic, they pivoted to hand sanitizer production which they donated to first responders. You can return the favor by picking up a bottle of gin from them directly (or at several local retailers). “A singularly fresh and surprisingly sippable gin. Artfully distilled with the finest Earl Grey tea and bright bergamot citrus peel. A fragrant aroma beckons, as your palate embraces richly smooth and lingering black tea flavors. Sip as a stand-alone spirit or try it in your favorite cocktails. We think it mixes particularly well with lemon, honey, mint, club soda or tonic.” –  Corgi Spirits “Inspired by figgy pudding, this most wonderful gin, distilled with rich dried fruit and warming spices is the perfect way to enjoy a cup of cheer during the most wonderful time of the year. Cozy up with a cocktail, or enjoy it neat with a festive flourish of orange zest. We’re sure this will be your new holiday tradition. Brown paper packages can take a back seat — this is one of our favorite things!” – Corgi Spirits Not long after I was introduced to Hudson County’s booming restaurant scene did I discover the artisan responsible for each chef’s canvas—ceramicist Jono Pandolfi. Before I knew it, top New Jersey chefs everywhere were geeking out over Pandolfi’s latest designs. At one point, Pandolfi became so sought-after that he was putting out 200 handcrafted pieces per day.

From his Union City studio, Pandolfi employs a 16-step technique to craft architecturally sound tableware that’s both intricate in design and minimal in color. He loves working in the confines of each restaurant’s unique table space and has excelled at it for years. Pandolfi’s designs are also available for purchase via his website. It’s true what they say, after all, “You eat with your eyes first.” “Founder Jono Pandolfi got his start making teapots in college. Over the years, he perfected the form: The shape of the handle and spout, for smooth and even pouring; the thickness of the vessel’s walls, to retain heat; the fit of the lid, to avoid rattling. Let’s just say that this teapot is very…considered. It holds just over two cups of tea and is paired with two half-dipped teacups and saucers. Want to give the teapot a try before you bring one home? Visit the Nomad Hotel in New York, Las Vegas, or Los Angeles to see it in action” – Jono Pandolfi Designs I was first introduced to Brew Watch Co.’s designer and founder, Jonathan Ferrer, in 2018. The NJIT grad spent his early years with Movado before transitioning into his own unique brand, where he serves as everything from watch designer to company photographer. Though the New Jersey native has transitioned a lot of his day-to-day to New York City, his designs are indicative of his hometown roots. (Read my full story on Brew Watch Co. here.)

“Coffee shops are my place of peace. This is where I enjoy designing, meeting with people and it just seems as though everyone around me is enjoying their time, too. So I thought it would be cool to put my own personal story into that. It’s a story that other people can relate to, which is the most important thing—relatability and connecting. That’s why I called it Brew.” — Jonathan Ferrer, Brew Watch Co.