Noticing More Deer in New Jersey? It’s Not Just You

If you live in New Jersey, you’ve most likely spotted several deer while cruising down the backroads. Sometimes, they prance through our yards, nestle in the treelines, or act as true deer in the headlights at night. For decades, the Garden State’s deer population has grown exponentially, causing more instances like these. Today, they’re appearing in more places than ever before, in the most unlikely of areas. Their adorable yet detrimental presence is creating a crisis for farmers and nighttime drivers alike. In fact, deer-related damages cost the state nearly $15 million per year. So, just how many deer are there and what harm do they pose?

The state of New Jersey is home to white-tailed deer, which are medium-sized animals native to North America. These deer have flourished in the Garden State for decades, frolicking in the forests and backyards throughout the year. Though, as you may have noticed, they’re beginning to appear more frequently.

Today, white-tailed deer are an invasive species in New Jersey. Their population size and reproduction rate are considered unsustainable, meaning they endanger the habitats and wildlife around them. While we can all acknowledge their adorable appearance and charming nature, these deer have thrown New Jersey into a decades-long crisis. Several research institutions, including the New Jersey Farm Bureau and Rutgers University School of Environmental and Biological Sciences, have been researching this uptick in deer populations. However, New Jersey has not passed legislation to address this issue. How Many Deer Are There?

In 2019, the New Jersey Farm Bureau conducted a survey on deer populations throughout the state. Areas surveyed by drone footage included Atlantic, Cumberland, Hunterdon, Mercer, Monmouth, Passaic, Summerset and Warren counties. Published in April, it concluded that deer populations are, on average, four to five times larger than safe and sustainable sizes.

Conducted by wildlife habitat planning and management consultancy Steward Green, the numbers revealed that, on average, approximately 80 to 100 white-tailed deer were spotted per square mile. In the most drastic areas, 210 deer covered one square mile. The findings were staggering, with numbers increasing in 2021 from the 2019 findings.

For perspective, the biological carrying capacity of white-tailed deer is five to 15 per square mile. This means the number of deer a habitat can support on a sustainable, long-term basis in New Jersey cannot exceed 15. Therefore, the study conveyed that Jersey’s deer population was concerningly unsustainable for other wildlife and surrounding environments. So, how do they harm the environment and locals? Photo by Will Bolding

The Risks of Unsustainable Deer Populations

Deer are shy, harmless animals on their own. Oftentimes, homeowners will feed them as they pass by or name them out of affection. The animals can even offer true benefits to their habitats. At correct population densities, deer encourage new plant growth, increase biodiversity, and help improve soil quality.

However, their population size strongly influences their environmental effects. Because of this, we consider them a keystone species––a species that has a disproportionately larger effect on their environment. So, the larger their population, the greater impact they’ll have on other animals and plant life. To compare, researchers consider human beings a hyperkeystone species––meaning we drastically change our world the more we inhabit it.

On the small end, the animals may interfere with your daily gardening. Whether it’s fruits like apples or flowers like roses, deer are known to devastate your green thumb’s dreams. In wooded, suburban areas, many New Jersey locals struggle to sustain their plants. And, with each passing year, more deer emerge to stifle their goals. A victim myself, deer have claimed the lives of all seven of my newly ripe tomatoes this season.

But these deer also pose risks on a much larger scale. 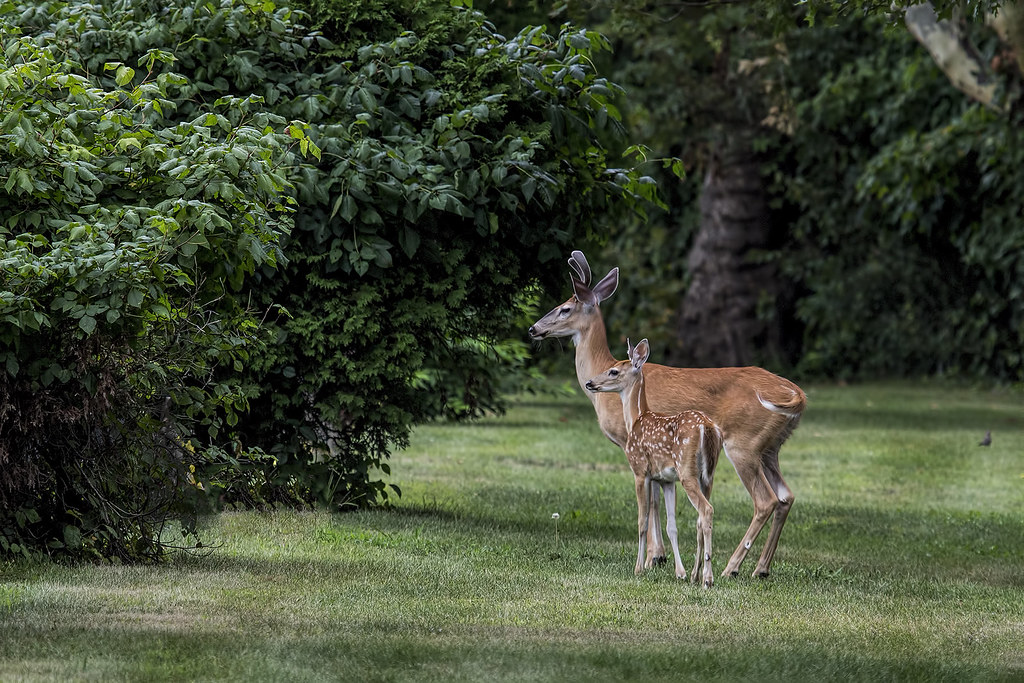 Deer overpopulation is felt statewide. Each year, deer consume an estimated $15 million of agricultural crops from local farms, with 50 percent of Garden State farmers claiming harvest loss to the animal. And, as their population continues to increase, it becomes that much harder for the farmers to recover.

There’s also an increasing risk for automobile collisions. When driving through the state at night, it’s become second nature for me to scan the treelines and flick on my high beams––and for good reason. In New Jersey, deer cause an estimated 26,000 car crashes each year. However, given their rapid reproduction rate, that number is expected to increase in 2021.

Finally, unsustainable deer populations threaten surrounding habitats. As a keystone species, deer can quickly alter their environment. Eating foliage from trees and depleting shrubs have resulted in fewer birds and rapid deforestation. Jersey’s forest lands and other native wildlife are at greater risk each year. Their overactive presence also puts neighborhood locals and their pets at increased vulnerability to Lyme disease.

Now, you may be wondering how their population is so uncontrolled. Interestingly enough, deer have no natural predators, making it difficult for their populations to plateau. Because of this, many states have to implement regulation policies to maintain a sustainable size. However, as New Jersey remains in a crisis, it has not established any new regulations. 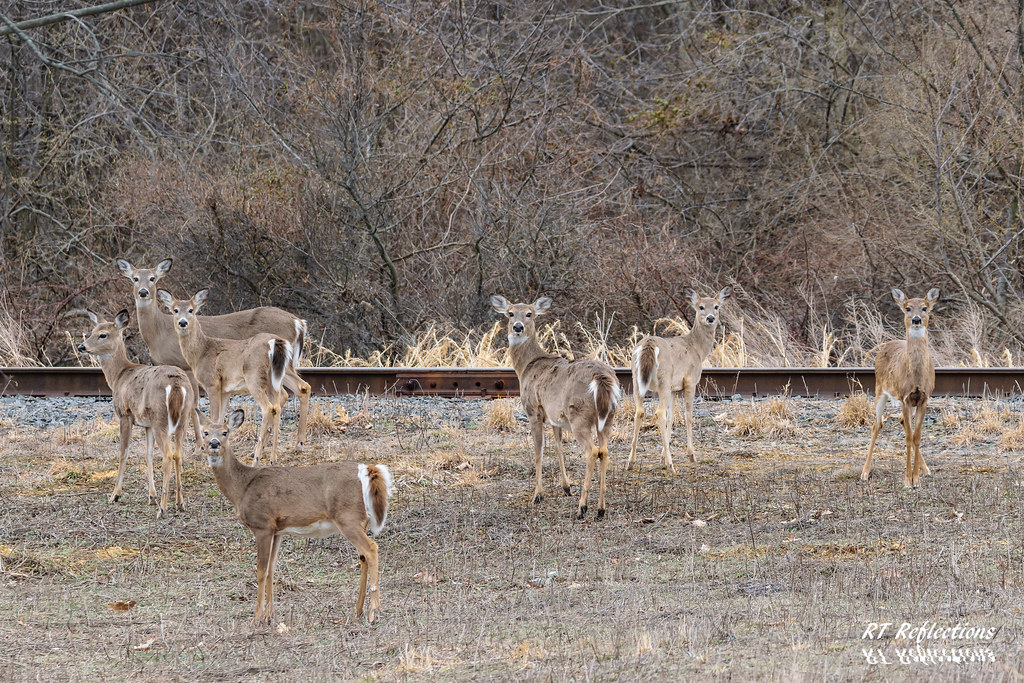 Wildlife laws are regulations for hunting or protecting certain animals. For example, there’s a limit to the amount of birds a hunter can catch in one day, measured in bags. If you’ve ever seen a hunter walk around in an orange vest, you’ve witnessed a wildlife law yourself. Protecting hunters and the animals they target are the primary goals of these regulations. Each state designs its own wildlife laws to address state-specific issues using a body of appointed officials. Because of this, regulations often vary in terms of the length of a hunting season, bag limits, or weapon standards.

There are many methods to creating a sustainable deer population. As many may guess, hunting is the most effective means. Most states extend hunting seasons when a certain animal’s population size has exceeded the biological carrying capacity of its habitat. For instance, in the U.S., locals discovered an invasive fish called the northern snakehead in the Northeast. As concerns grew about its population growth, states requested fishermen to reel in as many as they could. In doing so, the anglers protected other important fish species that shared the same habitat.

In this and other instances, preservation of other wildlife and the sustainability of habitats were the primary motivators to the wildlife laws. For these same reasons, the Garden State should implement hunting and other methods. Providing access to hunters by improving their access and opportunity to engage in the sport is an excellent method to reduce the overpopulation of deer. In fact, hunting is the most cost-effective way to ensure New Jersey sustainably manages its forests and agriculture. Yet, many people oppose this option. Deer are graceful and magnificent creatures, despite their threats to surrounding wildlife. Luckily, non-lethal methods are also available––though, they are less effective.

Sterilization and contraception methods are costly wildlife management tools. Some states have implemented trials, later finding they require multiple applications and don’t curb population size enough. As research improves in this area, a single-dose option may arise, which could improve the effectiveness of this method.

Another way for New Jersey officials to regulate the deer population is by selecting deer-averse plants, using chemical repellents, establishing physical barriers and relocating the animals. These more efficient strategies could help move deer from the areas they’re depleting without harming them. Establishing barriers along roads could decrease collisions, and treating the surrounding greenery could discourage them from consuming habitats and gardens.

Any one of these methods can and should be used in New Jersey to improve the quality of life for locals and other wildlife. If deer populations continue to grow without mitigation, the crisis will become irreversible.

As officials and advocates work to address the deer crisis in the Garden State, keep a few things in mind: stay alert on the roads, keep an eye on your outdoor pets, and don’t cry over stolen tomatoes.

Have you noticed more deer in New Jersey? Let us know in the comments below!